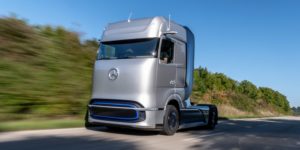 The Mercedes-Benz GenH2 Truck celebrated its world premiere at the event as a concept vehicle, offering a preview of heavy-duty fuel cell trucks with ranges of up to 1,000 kilometres. The GenH2 the first in the fuel cell drive segment. Daimler Trucks plans to begin customer testing of the GenH2 Truck in 2023, with series production scheduled to start in the second half of the decade.

In the effort to catch up to the performance capacities of a diesel truck, the storage of hydrogen is in particular focus for the company: Instead of storing the H2 in gaseous form under high pressure where 700 bar is usually the norm, Daimler is planning to use liquid hydrogen (known as LH2) with its significantly higher energy density.

One advantage of LH2 is that the tanks are smaller and, due to the lower pressure, also significantly lighter than a storage-tank for gaseous hydrogen. This is not only good for the installation space, but also for the load capacity. The production model will have a total weight of 40 tons and a payload of 25 tons. Each of the two stainless steel liquid hydrogen tanks in the GenH2 truck is designed to hold 40 kilograms of LH2.

The disadvantage of LH2: hydrogen is only liquid at very low temperatures. LH2 is already used in stationary applications at -253 degrees Celsius but is not currently in mobile applications on the road.

The GenH2 truck is driven by two electric motors with 230 kW continuous and 330 kW peak power each. Each of the two fuel cells provides 150 kW, a 70 kWh buffer battery can contribute up to 400 kW. In this way, as is typical for FCEVs, peak loads are absorbed by the battery during acceleration or on inclines, while the fuel cell is designed more for the power requirement during constant driving.

Daimler Trucks emphasised that it has worked with “one partner” in the development of the fuel cells. In April, the Stuttgart-based company and Volvo Trucks signed a declaration of intent to bundle their fuel cell activities in a joint venture. In preparation for this, Daimler has already transferred all its own fuel cell activities to the recently founded subsidiary Daimler Truck Fuel Cell GmbH & Co. KG.

As Daimler has already announced, the eActros with a 200-kilometre range will go into series production next year as an electric truck for heavy urban distribution. At the event in Berlin, Daimler Trucks gave a preview of a purely battery-powered, electrically driven long-distance truck for the first time: the Mercedes-Benz eActros LongHaul. This truck should be ready for series production in 2024 and will cover around 500 kilometres on one battery charge.

Daimler does not mention a battery capacity for the eActros LongHaul in its press release, but other figures are said to be more important for the electric truck. For example, truck drivers in the EU must take a break of at least 45 minutes after a maximum driving time of 4.5 hours. Daimler wants to use this time to recharge a large portion of the energy needed to continue driving. Daimler says: “The eActros LongHaul will therefore be the right choice for transport companies for regular use on plannable routes and with the appropriate distances and charging possibilities.”  The charging options are important to mention here since they must be both in the transport companies’ depots as well as along the highways.

Daimler Truck CEO Martin Daum emphasised that the manufacturer was focusing on both the battery and the fuel cell. “This combination enables us to offer our customers the best vehicle options, depending on the application,” said Daum. “Battery power will be rather used for lower cargo weights and for shorter distances. Fuel-cell power will tend to be the preferred option for heavier loads and longer distances.”

But at the presentation in Berlin, Daum also brought politics into play. He said that Daimler had presented the central technological specifications of its electric trucks, so that the requirements were known to everyone involved at an early stage. “Now it is up to politicians, other players and society as a whole to set the right framework conditions in motion,” said Daum, addressing Andreas Scheuer, the German Federal Minister of Transport, who was also present.

For his part, the German Minister for Trannsport talked about the “huge potential” he saw in hydrogen. “That is why we have been funding hydrogen as a transport fuel for over ten years – one current example is the concept truck presented today”, said Scheuer. “will continue to provide strong support to the development of climate-friendly drivetrains and innovations in and for Germany. This will include, but not be limited to, significantly expanding the funding of vehicles.”