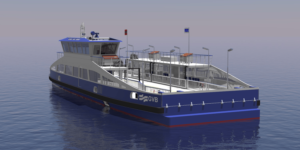 The electric ferries will be used on three North Sea Canal routes. These routes are used to transport more than 350,000 cars every year. The zero-emission ships will replace the current fleet that was built in the 1930s. The first one is expected to be delivered in summer 2021. After that, a further electric ferry will follow every six months.

Kim Strate Kiegstad, Vice President Sales at Corvus Energy said: “We see that the adoption rate for maritime Energy Storage Systems is increasing significantly across the globe – and especially in Europe. In every market, this is a process that needs to mature. Companies such as GVB leading by example will help local shipbuilding and shipowners increase their level of knowledge of the technology and its benefits. We do expect that almost every future newbuild will have some kind of energy efficiency solution included.”

Indeed, just this week the European parliament voted for the inclusion of CO2 emissions from maritime shipping in the EU Emissions Trading Scheme to decarbonise the shipping sector. Appropriate legislation is now being negotiated with European member states.

All five new all-electric ferries will be built in Holland Shipyard Group in the Netherlands. The dimensions of each ferry will measure 41 metres in length, is 13,9 metres wide. The ferries will be able to hold 20 cars, four trucks, or 400 passengers. Air-cooled Corvus Orca Energy ESS will supply electrical power to the ferry’s all-electric power and propulsion system.

Corvus Energy says that it provides battery power to more ferries than all other providers of energy storage systems combined. Starting with the first zero-emission ferry, Ampere, the company says that its ESSs have now been selected for almost 100 hybrid and all-electric ferries globally.

In February this year, we reported that BC Ferries will be using hybrid drives from Corvus. Last year the cruise company Aida Cruises announced a cooperation with the Norwegian-Canadian battery manufacturer to provide battery storage systems for Aida’s large ships.