The production too saw a new high from July throughout September as Tesla made 145,036 electric cars at its factories in the US and China. These figures for both deliveries and production beat the previous best quarter when in Q4/2019, Tesla had delivered 112,000 vehicles and built 102,672 electric cars. Clearly, the Californian carmaker has reversed the Corona-related decline in production and instead has once again achieved strong growth.

In the brief investor release on production and delivery data today, the company made no statement about the annual targets and business development in general – this will only be part of presenting the quarterly figures in a few weeks. Tesla pointed out that in terms of sales days, the stock continued to decline in the third quarter as delivery efficiency further improved. 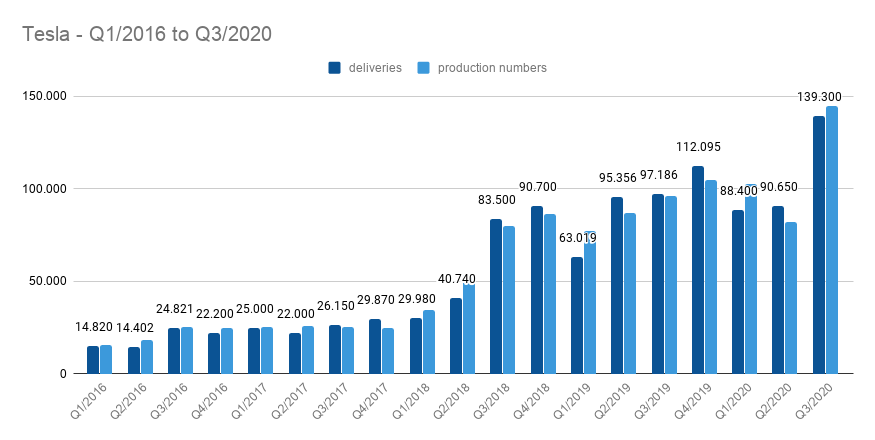 Still, taking their target of delivering half a million EVs this year – that was pre-Covid – Tesla will need another record quarter to close the year with 181,650 more vehicles. Looking at the current growth rate though, this does not seem impossible, especially as Giga Shanghai is gearing up.

In the quarter just ended, demand for the Model S and X was once again stronger. After deliveries of the premium range had previously fallen from 12,200 in Q1 to 10,600 vehicles in Q2, Tesla now has delivered 15,200 units of the two large models. During the same period, 16,992 Model S and X were produced. Both models are built exclusively in Fremont.


As expected, the two smaller Model 3 and Y series were able to record the significantly higher growth in unit numbers. As mentioned, Model 3 production figures in China continue to rise, and, Model Y production in Fremont is running better. Tesla reports 128,044 units produced (instead of 75,946 in Q2) and 124,100 vehicles delivered in both series – instead of 80,050 Model 3 and Y in Q2.

After the imposed production pause in Fremont, which affected the second quarter, Tesla now appears to benefit from some changes they had made to the production facilities during the lockdown. Besides, they erected an additional tent structure in Fremont in July to make more Model Y.

Also as an outlook to the quarter just begun: In August, a “Giga Press” arrived in Fremont – a giant die-casting machine designed to cast the Model Y rear body in two single pieces, possibly before the year’s end. (Eventually, this will go down to one piece.) And in China, Tesla wants to complete the Gigafactory 3 extension to host the Model Y this October or November. It is therefore quite possible that the first Model Y made in China will already appear in the Q4 statistics.

With reporting by Sebastian Schaal, electrive.net