In the course of its latest investment planning round for 2021 to 2025, Volkswagen intends to invest around 73 billion euros in the future-oriented topics including electrification, hybridisation and digitisation.

A total of 35 billion euros has now been budgeted for electric mobility, which is two billion more than before. From 2023, the funds will also be used to build the four-door electric ‘ID. Aero’.

Volkswagen Group announced the extra financing after the latest meeting of the Supervisory Board. The automotive group plans to pump 35 billion euros into purely electric mobility, while a further approximately 11 billion euros are planned for hybridization of the model portfolio. Above all, however, Volkswagen will increase the pace in the field of digitalisation. This can be seen in a comparison with the planning round last year when 33 billion euros was estimated for electrification at a similar level. Volkswagen now wants to pump around 27 billion euros into digitisation by the middle of the decade, which is around twice as much as in the previous planning period.

According to the Wolfsburg-based company, the approximately 73 billion euros represents around 50 per cent of all planned investments in property, plant and equipment and the total research and development costs in the planning period. This means that the three future fields mentioned above have once again been upgraded compared to previous planning rounds (2020 – 2024 just under 60 billion euros, a good 40 per cent of total expenditure / 2019 – 2023, 44 billion euros, 30 per cent of total expenditure). The joint venture companies in China are not included in the planning, as they finance investments in plants and products from their own resources. 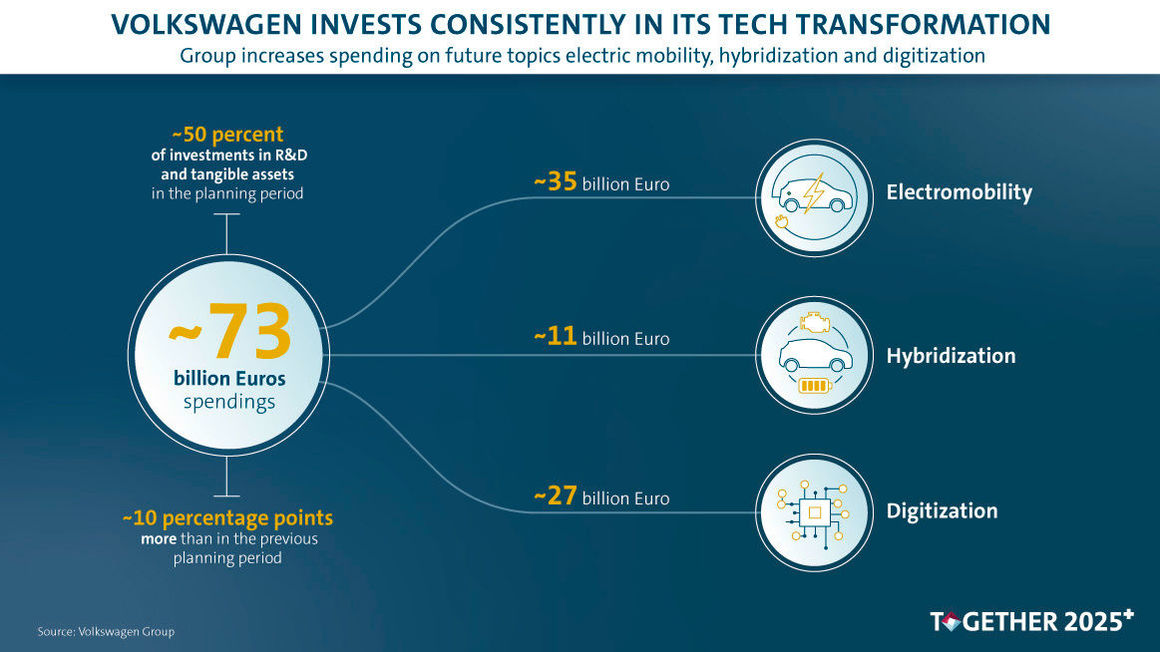 “Having set the course for a battery-electric future in the Volkswagen Group early on, we are now a global leader with our electric platforms and a broad range of electric vehicles,” says CEO Herbert Diess in view of the planning presented. “In the coming years, it will be crucial to also reach a leading position in car software in order to meet people’s needs for individual, sustainable and fully connected mobility in the future. To that end, we have doubled our digitalisation spend.”

In the course of the latest investment planning round, Volkswagen has also revealed new location decisions for the construction of future electric vehicles. At Volkswagen Commercial Vehicles in Hanover, for example, in addition to the fully electric ID. Buzz, three all-electric D-SUV models for other Group brands are also to be built at the Hanover plant.

At the VW plant in Emden, the automotive group is aiming to build the ID.4 from 2023, in addition to the production of the ID. Aero in Passat size – rumours about the production of the electric four-door model at the Emden plant have been circulating since 2018. Now the public confirmation has been made, and in the press release, the company simply calls the model ‘Volkswagen Aero’, i.e. without the previously used ID. abbreviation. It is also possible that the model will also be similar to the ID Space Vizzion shown in LA in 2019. At the same time, the Passat currently produced in Emden will move to Bratislava, Slovakia, from 2023. For the Salzgitter plant, the Group confirmed the billion-euro investment in the establishment of a battery cell production facility together with Northvolt.

Volkswagen is also renewing its target of bringing around 70 fully electric models to market by 2030. “About 20 of these have already been launched,” the Group headquarters reports. In addition, a total of around 60 hybrid vehicles are planned by the end of the decade, of which slightly more than half are already being produced. The Wolfsburg-based company says that it expects to produce 26 million electric cars by 2030, 19 million of which will be based on the Modular Electric Drive Kit (MEB) and a large proportion of the other seven million vehicles on the PPE platform. In the case of hybrid vehicles, the Group expects to produce around seven million units over the same period.

With the planned expenditure in the digital area, Volkswagen intends to address, among other things, the organisation launched this year called Car.Software, which is developing, among other things, a standardised operating system for the vehicles of the Group brands. The Wolfsburg-based company announced that it is initially planned to use the system in the Audi project Artemis in 2024. The company’s own share of the software is to increase from 10 to 60 per cent. In addition, a large part of the funds in the area of digitisation will be invested in the fields of artificial intelligence, autonomous driving and the digitisation of corporate processes. In future, the major corporation will no longer allow itself software problems such as those encountered with the market launch of ID.3 and now allegedly also with ID. Charger.

The planning round is based on Volkswagen’s expectation that the global economy will grow moderately over the next five years. The Group’s transformation is to be financed by an estimated 30 per cent increase in productivity, as well as by savings in administration and the adjustment of the product portfolio. The German carmaker says it will eliminate model variants, engine/transmission combinations and equipment that are in low demand “in order to reduce complexity and increase portfolio efficiency”.

Citroën UK tests the waters for the Ami electric car