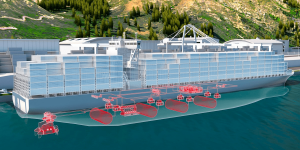 ABB has signed an MoU with Hydrogène de France (HDF) to jointly manufacture megawatt fuel cell systems for powering shipping vessels. The two partners want to optimise the production of large systems in order to be able to build fuel cell power plants in the megawatt range for ships.

The companies are relying on the cooperation between ABB and Ballard Power Systems announced in June 2018. This collaboration has, as planned, resulted in the development of such a megawatt-range fuel cell system and will now be built by means of the new cooperation between ABB and the hydrogen specialist Hydrogène de France. Production will take place in a new HDF factory in Bordeaux.

HDF was founded in 2012 and develops Multi-MW Renewstable power plants that combine solar or wind power with long-term storage based on hydrogen technology. Damien Havard, CEO of HDF says, “HDF is very excited to cooperate with ABB to assemble and produce megawatt-scale fuel cell systems for the marine market based on Ballard technology.”

When the Ballard cooperation between ABB also announced in summer last year, ABB also revealed that the system would have an output of 3 MW and be no larger than a conventional ship engine. “With the ever-increasing demand for solutions that enable sustainable, responsible shipping, we are confident that fuel cells will play an important role in helping the marine industry meet CO2 reduction targets,” said Juha Koskela, Managing Director, ABB Marine & Ports. “Signing the MOU with HDF brings us a step closer to making this technology available for powering ocean-going vessels.”

With its current fuel cell products, ABB claims that it already covers hydrogen-based propulsion systems on short routes, while larger ships could already cover their auxiliary energy needs with fuel cells today. With the new solution, this is now to be extended to drives of larger ships. An image distributed Swiss-Swedish company ABB, shows a container ship with four hydrogen tanks in the hull, several fuel cells and two Azipod electric drives.

Both ABB and Ballard are gaining momentum with hydrogen propulsion technology in the marine transport sector. Just one year ago,  Ballard Power Systems Europe announced the construction of a Marine Center of Excellence at its facility in Hobro, Denmark, where fuel cell modules for ships will be developed and produced.

In May last year, Ballard Power Systems announced its collaboration with ABB and other consortium partners in the Fuel Cells and Hydrogen Joint Undertaking (FCH JU) project Flagships with the aim of developing a fuel cell-powered tug boat for inland waterway vessels. ABB is also collaborating with the research organisation SINTEF of Norway to model a complete marine power system in a megawatt-scale propulsion plant.

Other companies collaborating on fuel cell ships include PowerCell of Sweden who have teamed up with Siemens. Since shipping has proven to be a significant source of GHG emissions a result of the traditionally low grade “bunker fuel” used in ships engines, governments and industry are increasingly looking towards decarbonising the marine transport sector. With the greater energy per weight capacity for heavy-duty and long-haul transport than purely battery-electric applications, fuel cell applications for marine vessels are enjoying increasing focus.