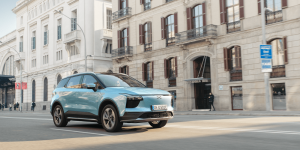 China’s Aiways is driving its European expansion as the company’s first electric SUV reaches new customers. The EV maker has named the Netherlands as next destination this November, following an earlier market launch in Germany and parts of France.

Aiways had planned to come to Europe since April 2020. The launch got delayed due to Covid-19 which had interrupted production in China. Yet, this autumn, the company has got back on track and started delivering the U5 in Germany.

Now Aiways reports the start of sales in the Netherlands. “Aiways Distributie Nederland BV” serves as a local partner for Aiways. They said prices start at €39,950 for the Standard trim and €43,850 for the Premium version.

When initially announcing market entry, Aiways also named Denmark, France, Norway and Switzerland as other target markets. In a more recent announcement, Aiways mentioned Switzerland and France but not Denmark and Norway.

As mentioned, sales in Germany had started in September and Aiways is working with Euronic and ATU there. Buyers in France may also look at the U5, albeit first on the Isle of Corsica. Aiways now also added the French department La Réunion and Israel to its sales and distribution network that builds on direct sales. Test drives and services lay with partners.


On Corsica, Aiways is dealing with the car rental company Filippi Auto that belongs to Hertz. They ordered several hundred U5 as part of the ‘Electrify Corsica’ project as reported. The INCO21 Group takes over sales and service in La Réunion.

For Israel, Aiways names the Blilious Group as exclusive distributor. Their Co-Chairman and CEO Dani Blilious stressed the company’s “well established nationwide service network, showrooms and a large logistic and spare part facility,” all essential components for Aiways that does not plan to establish such facilities overseas.

The Aiways U5 is the company’s first all-electric SUV. A 150 kW electric motor powers the 4.70-metre-long U5. In May, Aiways detailed a novel battery as having a sandwich structure designed to increase stability. At a capacity of 63 kWh, claimed range is at over 400 kilometres for the Premium model in WLTP.  Standard delivers 410 km. Aiways also announced that winter testing showed the U5 “was able to achieve a practical range of almost 300 kilometres even at temperatures well below freezing point.”

It remains unclear when and whether the Aiways U5 will come to Switzerland, Norway and Denmark. The company did say it would announce further steps in the coming weeks.

Renault Captur PHEV now on sale in the UK