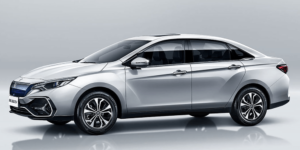 Dongfeng Motor Company Limited (DFL), the Chinese joint venture of Dongfeng and Nissan, plans to introduce at least 17 electrified models of the Dongfeng, Nissan, Venucia and Infiniti brands by 2023.

The company announced this at Auto Guangzhou 2020. As Gasgoo adds, DFL intends to increase the share of electrified models in its total sales to 30 per cent by 2024 and increasingly manufacture key components for vehicle electrification locally. As early as 2018, the joint venture, in which Nissan and Dongfeng each hold a 50 per cent stake, announced the introduction of a ‘green roadmap’, which includes production and sales targets as well as the use of energy-saving production processes and second-life applications for used batteries.

The fruits of the cooperation between Nissan and Dongfeng can be seen in the form of the Sylphy Zero Emission, the first electric Nissan series model on the Chinese market. DFL started production of the electric vehicle in August 2018, and other examples include the Venucia D60 EV, which is based on the Sylphy and will be shown at the Shanghai Auto Show in 2019, and the Dongfeng Rich 6 EV. By the way: Nissan alone plans to launch seven models in China by 2022, including some e-Power models as well as the all-electric Nissan Ariya, which is manufactured by Dongfeng Nissan and will be available in China starting next year.

The production version of the Ariya celebrated its virtual debut this summer. With two engine layouts, two battery options and a special performance version, Nissan will be able to offer a total of five versions of the Ariya in Europe. For the first time, Nissan will use the new e-4ORCE four-wheel drive in the two-engine configuration of the electric SUV.

Incidentally, a media report earlier this month suggests that Nissan intends to sell only electric and hybrid cars in China from 2025. According to the Japanese business newspaper Nikkei, Nissan decided to completely electrify its model range in China in light of the emerging ban on the registration of pure combustion engines from 2035.

Renault Captur PHEV now on sale in the UK

Next BMW 3 series may exclusively launch in China