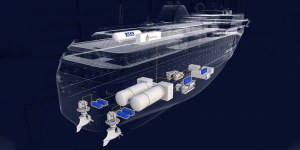 The Norwegian shipbuilder Havyard wants to complete the development of its announced fuel cell system for large ships next year and has now found its own company to market the system.

The new company Havyard Hydrogen AS will be headed by Kristian Osnes, who previously worked in the group’s research and development department. According to the manufacturer, Havyard’s FC system is scalable up to a total output of 3.2 megawatts and will also offer flexible placement of the hydrogen tanks so that it can be used in both new and converted ships. The tanks operate on hydrogen, which is hydrogen that liquefies at temperatures below -253 degrees Celsius.

“We are seeing increasing interest in the market for hydrogen,” says Gunnar Larsen, CEO of the Havyard Group. “This form of energy produces zero emissions at the same time as it is the most technologically mature for large vessels sailing over relatively long distances. With our know-how and expertise in hydrogen, we are in an excellent position to be among the leading players in the development and delivery of hydrogen systems”.

With the help of other companies in the group, the spectrum is to extend beyond the fuel cell system. According to Larsen, it is also possible to supply the complete control and energy systems “from the bridge to the propeller”.

Havyard’s head of hydrogen Osnes adds that the challenge with such large hydrogen systems is much greater – there can be no failures on the high seas with the corresponding swell, and the handling of hydrogen must therefore be different from on land.

As Osnes says, there is indeed a flourishing increase in interest in hydrogen systems for shipping. In September this year, the EU Parliament demanded greater maritime emission control. The Parliament is now ready to start negotiations with the member states on the final form of the legislation.

When the US Department of Energy (DOE) released its Hydrogen Program Plan the Plan focuses on what the DOE describes as hard-to-decarbonise sectors and specifically mentioned marine applications. The Plan describes hydrogen carriers as an attractive option due to vast distances and heavy loads.

Elsewhere in the challenge of decarbonising this sector, ABB signed an MoU with Hydrogène de France (HDF) to jointly manufacture megawatt fuel cell systems for powering shipping vessels in April this year. Just one year ago, Ballard Power Systems Europe announced the construction of a Marine Center of Excellence at its facility in Hobro, Denmark, where fuel cell modules for ships will be developed and produced. ABB is also collaborating with the research organisation SINTEF of Norway to model a complete marine power system in a megawatt-scale propulsion plant. Other companies collaborating on fuel cell ships include PowerCell of Sweden who has teamed up with Siemens.

At Havyard, Osnes says: “If Norway and the rest of the world are to achieve the emission reduction goals, we need solutions that can reduce emissions towards zero,” He explained: “We believe that the timing is right, given that both the market and the regulatory requirements create demand for concrete solutions that can result in substantial reductions in emissions from shipping.”