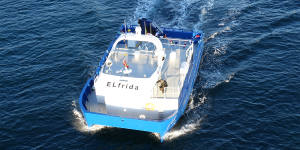 PowerCell of Sweden has teamed up with Siemens. They want to develop fuel cells for marine systems together. The aim is to integrate PowerCell’s fuel cells into Siemens’ existing systems for the marine segment.

Siemens had begun to electrify their BlueDrive line with batteries last year already. Yet, by signing this latest memorandum of understanding with Swedish PowerCell, Siemens is adding fuel cell drives to their marine lineup for the first time. Such a hydrogen-filled system can then power ferries, yachts and cruise ships for example.

Per Wassén, CEO of PowerCell sees “a great potential for the cooperation,” due to the marine industry increasingly trying to introduce low emission solutions. The U.N. International Maritime Organization (IMO) has called to reduce emissions by at least 50 percent by 2050 from 2008 levels reportedly.

For Siemens, the new partnership builds on their electrification of marine systems. Siemens batteries for ships with electric drives are currently being made in Norway starting this year. The move had cost Siemens 10.5 million euros (100m Norwegian Krona) but the company expects to profit from low cost for green energy from hydropower. Two all electric ships, the Future of the Fjords and  Boreal’s electric ferry, are currently on the docks awaiting their launch into Norwegian waters upon completion. The first ever electric ferry in Norway however, had already been built with Siemens technology back in 2015 (we reported). Their BlueDrive technology also powers the salmon farming electric vessel Elfrida in Norway since 2015.

In terms of fuel cell drives for ships, Siemens and PowerCell are not the only ones that have jumped on board. ABB and Ballard recently agreed to develop a system to power ships with fuel cells as well. Their system for hydrogen-powered ships aims to generate 3MW or 4,000 hp and fit within a single module no bigger than a conventional boat motor.