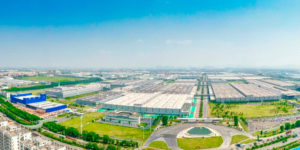 The ID.4 is produced in China by SAIC-VW and FAW-VW under different names. The ID.4 X is the version of the electric SUV developed for SAIC-VW, while the ID.4 Crozz is the counterpart of FAW-VW. According to Volkswagen, the two plants together have a maximum total capacity of 600,000 units per year.

The two production plants play a key role in the Group’s planning to increase the share of electric vehicles in Volkswagen’s total sales to 35 per cent by 2025, which is said to be around 1.5 million electric cars. The ID.4 is expected to account for a third of this figure. By 2023 in China, the German car manufacturer already wants to have eight I.D. models on the market. “The MEB provides unique versatility and is an incredibly flexible platform for vehicle production, meaning, we can offer customers a wide range of highly attractive electric models, from compact city cars to spacious buses or SUVs,” says Stephan Wöllenstein, CEO of Volkswagen Group China.

With the start of production of the ID.4, vehicles on the MEB platform are now coming off the assembly line for the first time at the Chinese plants in Anting and Foshan. While Anting is a newly built, purely electric car plant, where only MEB vehicles are produced, Volkswagen is running a different line in Foshan: In the future, both conventional models with combustion engine based on the MQB platform and purely electric MEB models will be built there on a joint production line.

On the occasion of the ID.4 production start at FAW-Volkswagen, the German automotive group will provide further insights into the plant in Foshan. The factory has been redesigned on the site of the original production facility as one of the most flexible plants in the global production network. The joint production of MQB combustion-engine cars and electric cars is not the only thing: “A highly flexible setup also enables the simultaneous production of six to eight MEB models,” Volkswagen says. With more than 1,200 robots in the body shop and an automation level of almost 100 per cent in the paint shop, Foshan is one of the most productive plants in China. According to the manufacturer, the production process is CO2-neutral. A 200,000 square meter solar power system and a water recycling system contribute to the plant’s sustainable operation.

The pure electric car plant in Anting was built in 2018 and 2019. The total investment was 17 billion yuan (2.15 billion euros). Pre-production started one year ago. According to Volkswagen, the plant uses the latest production technologies, such as the fastest laser welding process in the Group and fully automated cockpit installation. Among other things, the new building has a solar power system, improved heat exchanger systems, intelligent lighting control, waste management and rainwater recycling.

With the production start of the ID.4 models now underway, VW has kept its own deadlines and schedules. The first units are to be delivered from the beginning of 2021, and in the EU the ID.4 is scheduled to go to its first customers this month. Series production in Zwickau began in August.

Meanwhile, there are growing indications that the ID.3 will make its market debut in China. So far the ID.3 has only been available in Europe. After it was recently leaked that VW intends to launch the ID.3 in China at the end of 2021, Chinese media are now reporting that the ID.3 will be produced by FAW-Volkswagen and SAIC Volkswagen, similar to the ID.4.