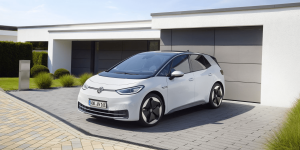 VW plans to launch the ID.3 in China at the end of 2021. So far the ID.3 has only been available in Europe. According to a report in German media, Volkswagen has already determined where in China they will build the ID.3.

Automobilwoche revealed this development citing  Christian Dahlheim, head of Volkswagen Group sales. “In 2021 we will expand our portfolio of battery electric vehicles in China,” said Dahlheim. “The ID.3 will start there in the fourth quarter.”

The VW ID.3 for the Chinese market will be produced at the SAIC VW plant in Anting, where one of the two Chinese versions of the ID.4 is already rolling off the assembly line. So far, the ID.3 has only been built in Zwickau.

In China, SAIC-VW is producing the ID.4 X for South China in Anting and has made some optical changes to the model. FAW-VW’s ID.4 Crozz for the north of the country corresponds to the European version presented in September. Whether SAIC-VW will also make corresponding changes to ID.3 is not clear from the report.

Also ready to roll in the Chinese plant in Anting, the third model series to be built will be the ID.6, initially only available in China, the ID. Roomzz study shown in 2019. Dahlheim gave Automobilwoche confirmation that the ID.6 is also to go into series production there in 2021. Chinese media already reported in April that VW had started production of the prototypes of the electric SUV.

Even before the premiere of the ID.4, VW brand boss Ralf Brandstätter declared the ID.4 a “world-class car“. VW plans to sell 1.5 million electric cars by 2025, of these, 500,000 will be ID.4s built on three continents. Brandstätter also announced some “country-specific adaptations” to the respective markets, as SAIC-VW did with the ID.4 X.

The ID.3 is now likely to become a “world-class car” too, albeit on a different scale than the ID.4. While the e-SUV is also to be built for the North American market at the US plant in Chattanooga from 2022, from the Group’s point of view, it looks unlikely that VW will sell the compact ID.3 in the USA for the time being.

2 Kommentare zu “Volkswagen plans to make and sell the ID.3 in China”