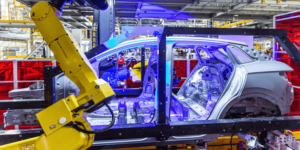 The ID.4 is produced in China by SAIC-VW and FAW-VW under different names. According to Gasgoo, the ID.4 X is the version of the electric SUV developed for SAIC-VW, while the ID.4 Crozz is the counterpart of FAW-VW. At a later date, the ID.3 will also roll off the production line at the Anting plant.

According to SAIC Volkswagen, the first ID.4 X that was built on 27 October, is vehicle number 23.000.001 to be produced by the joint venture. The company was founded in 1984 and has been an official joint venture since 1988.

With the start of production now completed, VW has met its own schedules. As early as November 2019, notably before the Corona crisis, it was announced that series production would start in October 2020 which the carmaker has now managed.


Anting is a purely electric car plant where only MEB vehicles are built. The foundation stone for the plant was laid by SAIC-VW in October 2018. Pre-production had already started in Anting in November 2019, at that time it was still called “with an ID specially designed for the Chinese market. Model of the Volkswagen brand”. The plant in Anting is designed for up to 300,000 vehicles per year, with a total investment of 17 billion yuan (2.15 billion euros).

The ID.4 is scheduled for launch in China in spring 2021. Shortly after Anting, production of the ID.4 Crozz is to start in Foshan (but here with FAW). In the EU, the first units are to be delivered in December 2020, with series production in Zwickau starting in August.

Even before the world premiere of the ID.4 in September, VW brand boss Ralf Brandstätter had already emphasised that the ID.4 was designed as a world car, but that it would come to the respective markets with a few “country-specific adaptations”. “However, the common ground is also present in all core markets with ID.4,” said Brandstätter. “Customers want strong technology, high range, rapid charging times.”