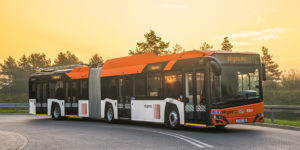 In Bergen, 102 battery-electric buses from Yutong took up service at the beginning of this month, 88 of which are 12 meters long and 14 of which are 15 meters long. Besides the Yutong buses, Polish bus maker Solaris has provided ten trolleybuses.

Public transport operator Keolis says that it integrated the large electric bus fleet into regular service on 1 December after 18 months of preparation. In addition to the aforementioned electric buses, the fleet also includes 26 new Volvo buses running on biodiesel. The second-largest city in Norway, therefore, boasts a “fossil-free bus network”.

Keolis was awarded the concession to operate the bus network by the Skyss Transport Authority in mid-2019. The contract, worth over 400 million euros, is valid for ten years from 2020 to 2030 and stipulates that in future 75 per cent of bus traffic must be handled by electric buses. At the end of 2019, Keolis ordered ten Trollino 18 articulated trolleybuses from Solaris and placed a major order with Yutong.

The trolleybuses will now operate on Bergen’s only trolleybus line. The Yutong buses will commute on the routes without overhead lines of the bus network, which comprises 27 lines and connections. The buses will be charged overnight at the Mannsverk depot, which has been modernised for this purpose and, according to Keolis, can charge up to 91 buses at the same time.