In Norway, 7,035 new electric cars were registered in November. Electric vehicles accounted for 56.1 per cent of new passenger car registrations. With 986 units, the VW ID.3 was the most popular model across all drive types.

In addition to the 7,035 electric cars, 2,938 plug-in hybrids were newly launched on the roads in Norway. The market share of hybrid-electric vehicles was 23.8 per cent. Compared to the same period of the previous year, this segment recorded an increase of 31.2 per cent – in October the increase was just 0.3 per cent. Besides, 1,196 hybrid cars were newly registered: a drop of 10.9 per cent compared to November 2019. Hybrid vehicles accounted for a market share of 9.5 per cent. 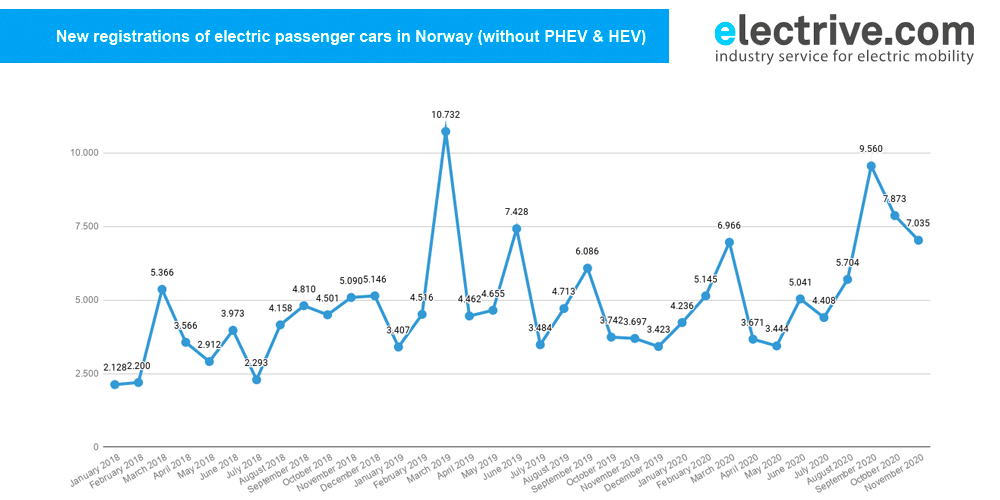 In terms of the individual models, most new registrations were for Volkswagen ID.3, whose deliveries only started in September. Last month, a total of 986 new electric cars hit the road. This means that 5,451 ID.3 have been delivered in Norway since September, bringing the model to second place in overall statistics in just three months.

However, the lead of the Audi e-tron in the first place is large with 8,773 vehicles, especially considering the e-tron also performed well in November with 569 cars. Also worth mentioning is the MG ZS, which had 644 new registrations in Norway in November.

BMW to withdraw from Formula E