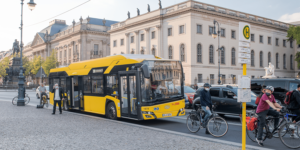 Solaris has completed delivery of the 90 electric buses ordered by Berliner Verkehrsbetriebe (BVG) in June 2019. All 90 of the Solaris Urbino 12 buses are now in regular service making a total of 123 electric Solaris buses on Berlin streets.

According to the Polish manufacturer, this was the largest order yet fulfilled in Germany. When the order was placed in summer 2019, it was said that the costs for the 90 new vehicles, including the required charging infrastructure, were likely to total around 61 million euros. The twelve-meter-long buses are equipped with batteries with a nominal capacity of 300 kWh and can carry 65 passengers. Among other things, the models are equipped with air conditioning including a CO2 heat pump, a video surveillance system and USB charging sockets for passengers. They are charged by plug.

Solaris, meanwhile, says it recorded the largest share of newly registered battery-electric buses among all manufacturers in Western Europe in the first nine months of 2020. Solaris says this made up 242 units, which corresponds to a market share of just under 25 per cent. So far, the manufacturer has delivered more than 180 vehicles to German customers, including Berlin, Dresden, Frankfurt am Main, Hamburg, Hanover, Nuremberg, Offenbach and Würzburg.