In the fourth quarter, 179,757 Teslas were built (16,097 Model S/X, 163,660 Model 3/Y). When looking at the figures for the year as a whole, it must be taken into account that at the beginning of the year the assembly lines in Shanghai were briefly brought to a standstill due to the Corona pandemic, and later no cars came off the production line at the main plant in California for several weeks.

In terms of deliveries, Tesla was just above the production figure in the final quarter; between October and the end of December, 180,570 vehicles were handed over to customers. Here the breakdown was 18,920 Model S and X and 161,650 Model 3 and Y. The fact that fewer Model S and X were built than delivered in the final quarter is hardly surprising, as assembly lines have been idle since mid-December. This has led to speculation that both models could get a refresh. 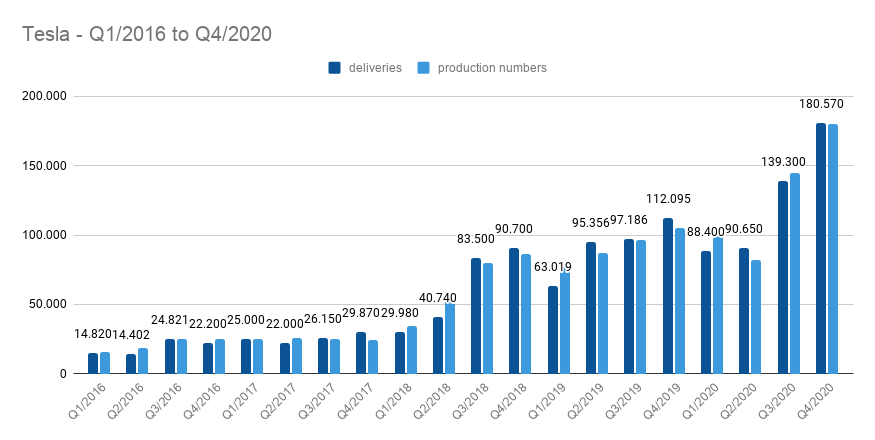 The production figures for the fourth quarter already include the first Model Y from the Gigafactory Shanghai. However, these vehicles have not yet been delivered, but these are expected to begin shortly.

For the year, the growth in production and deliveries can be explained primarily by the Gigafactory Shanghai, but manufacturing in Fremont is also doing well. In the fourth quarter of 2019, Tesla had surpassed the 100,000 deliveries mark in a quarter for the first time, and for the full year 2019, Tesla reported 367,500 deliveries. At the time, that represented an increase of about 50 per cent over 2018 and comparing 2019 and 2020, Tesla has increased deliveries by about 36 per cent.

Tesla has not yet given their targets for the current year in its usual brief announcement on production and delivery figures. It is possible that Elon Musk will make some statements on the expected business development in a few weeks when presenting the business figures for 2020 or the subsequent call. With the ramp-up and start of deliveries of the Model Y built in China and the start of production of the Model Y in Giga-Berlin in Brandenburg, planned for the middle of the year, Tesla should have laid the foundation for further growth as well as the potential update of the two large vehicle models.