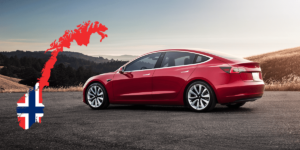 In Norway, 13,718 new electric passenger cars were registered in December nearly double the number registered the month before. Electric cars accounted for 66.7 per cent of new car registrations in December and 54 per cent for the year as a whole.

Overall in 2020 electric car registration statistics in Norway, the Audi e-tron was the best-selling model across all powertrains with 9,227 units. Across the year with 7,770 units Tesla’s Model 3 has moved to second place and very close ahead of the VW ID.3 in third place with 7,754 vehicles. In fourth place is the Nissan Leaf with 5,221 units, followed by the VW eGolf (5,068 vehicles) and the Hyundai Kona (5,029).

Taking a closer look at December in isolation; although the Audi e-Tron scored well in the year as a whole and represents a 6.5 per cent market share in Norway on its own, it didn’t make the top ranks in December with just 454 new registrations.

In December, the VW ID.3 more than doubled its 986 registrations from November to 2,303 units but was still only good enough for second place in terms of models across all drive types. In the last month of the quarter, Tesla was able to record 4,232 Model 3 units in the registration statistics in Norway. Adding to the usual end-of-quarter delivery boom this year is likely the fact that the first Model 3s of the 2021 vintage were delivered in December with the recently unveiled modifications and heat pump

Generally regarding the Norwegian market in December 2020 compared to December 2019, the now 13,718 electric passenger cars is an increase of an impressive 300 per cent! With 76,804 electric cars in 2020 as a whole, the Norwegian electric car market is up from 2019 (which market 59,619). So with a very strong December, Norway more than made up for a slightly weaker November (7,035 electric cars). In November, the EV market share was “only” 56.1 per cent, while in both September and October it was above 60 per cent. 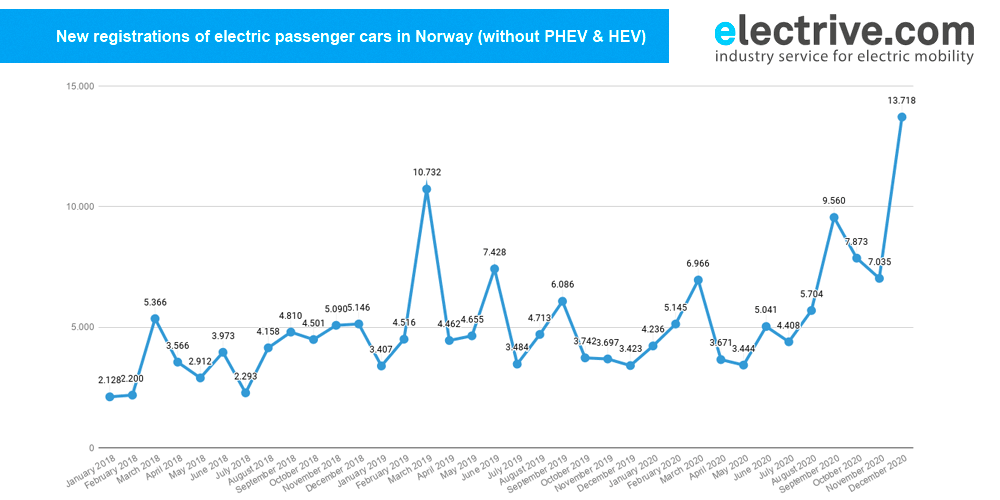 In addition to the 13,718 electric cars, 4,192 plug-in hybrids were newly put on the road in Norway. The market share of hybrid-electric vehicles was 20.4 per cent in December. Compared to the same period last year, this segment saw an increase of 61.6 per cent. In 2020, PHEVs came in at 20.4 per cent of the market. Looking at new registrations from January to December 2020, the PHEV share grew by 49.8 per cent compared to the same period last year.

Looking at individual model sales, in December the Tesla Model 3 was ahead of the VW ID.3, followed by the Nissan Leaf (692) and the Polestar 2 (670). In between, the Volvo XC40 is still listed with 850 units, but the Norwegian statistics do not show how many examples of the P8 Recharge are involved and how many plug-in hybrids and internal combustion engines of the XC40 are still included in this figure.