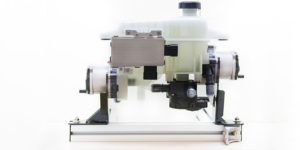 Hyundai Wia has developed a thermal management system for electric cars that is intended to improve their range and charging capability.

The mechanical engineering company, which is part of the Hyundai Group, wants to have the solution ready for series production by 2023. From then on, it is to be used in electric cars based on the E-GMP platform.

Hyundai Wia calls its system an “Integrated Coolant Distribution-Supply Module”, which regulates the temperature of the electric motor and the power electronics as well as that of the battery. Previously, two separate devices were needed for this, the mechanical engineering company from Changwon, South Korea, informs us. The innovative new approach minimises the number of automotive parts and makes optimal use of the installation space.

Hyundai Wia claims to have filed four foreign and about 30 domestic patents during the development of the module. According to the company, the cooling management system is being tested at its research and development centre in Uiwang – among other things, using newly developed test setups. While the use of the new module in electric vehicles based on the Electric Global Modular Platform, or E-GMP, is planned for 2023, Hyundai Wia’s goal for 2025 is to develop a module that integrates the vehicle’s climate system in addition to the functions mentioned. In future, this will be called the “Integrated Thermal Management System”, or ITMS for short.

Incidentally, Hyundai presented the E-GMP only a few weeks ago. The platform is to form the basis for the company’s future electric cars – and is to be distinguished above all by its efficiency. Hyundai has announced the Ioniq 5 as the first vehicle that will be based on the E-GMP. Following the digital world premiere of the CUV in February, the 800-volt battery-electric vehicle will be available for pre-order, according to the South Koreans. In Europe, the BEV is to celebrate its market launch in summer 2021.