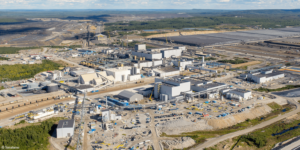 The Finnish state mining company Terrafame has received environmental approval for the battery materials factory it has been planning for years in Sotkamo, Finland. Production, which is mainly geared towards nickel products, is scheduled to start in April.

Terrafame already received the construction permit for the Sotkamo plant in 2018. With the environmental permit now obtained, the company can start production in eastern Finland. The permit is valid regardless of possible complaints against the factory, which can be filed until the end of February, according to Finnish media.

That there could be complaints is apparently not unlikely. Terrafame had taken over the Talvivaara nickel mine, located in Sotkamo, from the insolvent Talvivaara Mining Company in 2015. There have been various environmental scandals around the mine, including excessive sulfate levels in wastewater or a leak in a wastewater pond that leaked water contaminated with uranium and other toxic materials.

However, a landfill for waste products has apparently been rejected by the relevant administrative authority. Instead, it must be processed and transported elsewhere for further processing or recycling. In addition, noise emissions from the factory have been heavily regulated.

According to Terrafame CEO Joni Lukkaroinen, the carbon footprint of the nickel sulfate produced by the plant is said to be more than 60 percent below the industry average. “Terrafame’s purpose is to enhance low-carbon mobility with responsible battery chemicals,” Lukkaroinen said. “Terrafame’s integrated production process – which begins in its own mine and ends with battery chemicals on one industrial site – is a unique and energy-efficient entity that provides customers with a transparent, traceable, and truly European battery chemicals production chain.”

Update 29 June 2021: The Finnish state mining company Terrafame has started the production ramp-up of its announced battery materials factory in Sotkamo, Finland. The factory is expected to be able to produce nickel sulphate for one million electric car batteries and enough cobalt sulphate for 300,000 batteries annually.

“In 2018, the company’s Board of Directors made a far-reaching investment decision, which moves Terrafame downstream in the processing chain to become a producer of battery chemicals,” said Lauri Ratia, Chairman of the Board of Terrafame, adding: “When the plant now starts its production, we can be pleased with the timing of the project, as the concerns regarding climate change and particularly the carbon emissions of transport are sharply increasing the demand for electric vehicles.”