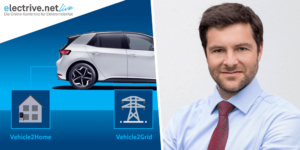 Volkswagen has just announced in a talk with electrive that it will develop Vehicle2Grid functions for its electric vehicles. VW called for much closer cooperation between the automotive industry, the energy sector and politicians to make bidirectional charging a success.

With the market launch of the first volume models based on the MEB, Volkswagen wants to achieve high unit sales of electric cars. Volkswagen has been hesitant about electric mobility for a long time but is now giving it plenty of power with the ID.3, ID.4 and other MEB models. Although the MEB platform has been developed from the ground up explicitly for electric cars, MEB electric cars have so far been rather conventional regarding charging. There are currently no innovative functions here and the fear that the power grid will suffer from the rapidly increasing number of electric cars is still ingrained in many people’s minds.

In the phase of expanding supply, however, there is movement in the matter of charging: Head of Charging at VW Martin Roemheld has announced that the group is working on bidirectional charging functions for its vehicles. “We are already developing the technology for our vehicles. But we also need smart grids, flexible electricity prices, a reduction in taxes and levies and, above all, the right regulatory framework. The energy sector, the automotive industry and politics must therefore work closely together, much more closely than they have so far,” Roemheld demanded at the online conference electrive.net LIVE. “Germany can finally lead the way internationally here. We should take advantage of that!”

The conference’s leading question was “Quo vadis of electromobility 2021?”. Roemheld’s answer is simple: “The e-car is booming – and with vehicle-to-grid, the next big thing is already around the corner,” says the VW Head of Charging. “In the future, the energy of the vehicle will be versatile.” In other words, Volkswagen’s focus this year is no longer on getting the MEB electric vehicles on the road in the highest possible numbers, but on integrating these vehicles into the power grid in the best possible way. By the end of the year, VW electric cars should support Plug&Charge, but Roemheld did not give a time frame for V2X (vehicle-to-anything) applications.

In addition to technology, other prerequisites must also be created. “You will see that the ranges that customers want go far beyond daily needs,” Roemheld said. “We should use this potential in terms of storage capacity.” But for this to happen, not only must the cars be connected to the grid the vast majority of the time, but the customer must also be willing to give up some of his autonomy (in the form of range). “Here we and the market have to make offers so that the customer makes his vehicle available to the energy market,” said Roemheld when speaking to electrive. In order for the market to be able to make corresponding offers, he said, the aforementioned regulatory framework is needed.

The idea of vehicle-to-grid or V2G for short is well known and has already been demonstrated on many occasions: In the event of fluctuations or bottlenecks in the local power grid, electric cars connected to a corresponding charging station can feed electricity from their traction battery back into the grid and thus stabilise the grid.


So far, so good. But VW backs this up with new figures: Roemheld calculates that with ten million e-cars, “around 400-gigawatt hours of storage capacity” would be available. “This could be used to compensate for fluctuations in wind and solar energy, among other things,” says the VW manager. “E-car drivers, therefore, accelerate the energy transition and benefit financially at the same time.”

With a bidirectional wallbox, however, one’s own home could also be supplied with energy from the car battery – called Vehicle2Home or V2H. This would allow the car to temporarily store the electricity from its own photovoltaic system. Or, with an appropriate electricity tariff, it could charge the battery during periods of low-cost electricity or when there is a particularly large amount of renewable energy in the grid, and then later use the green electricity to supply the house when there is less renewable energy available.

On an English-speaking note, you may want to check our interview with Roemheld in 2019, where he already outlined some of the ideas presented today.

If the car can not only store electricity but also release it, other applications will become possible – not necessarily grid-serving, but practical for the customer: Vehicle2Device or V2D. With the electricity from the battery, all kinds of devices can be operated independently of the grid and sockets, such as tools on the construction site, the computer in the mobile office, the electric barbecue at a picnic.

The advantages of V2X are clear, but users also worry about disadvantages. In addition to the aforementioned sacrifice of some range when power has just been drawn from the battery to stabilise the grid, some fear that the battery itself will age more quickly. The constant charging and discharging in bi-directional operation would put a strain on the battery in the long run. This is a fear that Markus Hackmann, Managing Director E-Mobility at the consultancy P3 automotive, counters: “A few years ago, battery developers were still heavily focused on ensuring that the battery had a guaranteed service life in the vehicle,” says the eMobility expert. “Today, they are much bolder when it comes to service life; bidirectional charging is no longer a challenge there.”

Volkswagen is not the only company working on integrating V2X applications: Hyundai had presented details of its Electric Global Modular Platform (E-GMP) in December. One important development is an Integrated Charging Control Unit, which replaces the classic onboard charger. This unit will not only enable AC charging with up to 11 kW, but will also be bidirectional.

According to the Hyundai announcement, this will make it possible to map all those functions that Roemheld has also outlined. Feeding electricity back into the grid, supplying one’s own home with energy, but also supplying appliances and tools with alternating current via a socket or a corresponding adapter. In addition, there is a function that VW has not mentioned so far: The Hyundai development is also supposed to be designed for Vehicle2Vehicle (V2V) and thus be able to directly charge another electric car.

Another difference between Hyundai and VW: while the German carmaker is still working on the necessary technologies for this, according to Roemheld, the S.Korean company will present the first model with these functions in a few weeks with the Ioniq 5. One thing is clear: if not only one manufacturer works on such functions, but two globally very important e-car platforms are designed for them, V2X applications will spread much faster than with proprietary solutions.

Even the German Vehicle Association, the VDA, which has long been reticent about electromobility, has now recognised the change and is addressing the expansion of the charging infrastructure as one of the most important topics in 2021. “We can see how the number of vehicles has grown in recent years, the momentum – a tripling of registrations in 2020 – is very remarkable,” said Joachim Damasky, Managing Director Vehicle Technology & Eco-System at the VDA, during his conference appearance. “Of course, we must not allow further growth to be slowed down by the charging infrastructure. The ratio of vehicles to charging points is increasingly unravelling.”

Damasky is first and foremost concerned about the quantity of charging points, but he is also worried about the quality of the charging processes. Here, the VDA managing director alludes to the amendment to the German Energy Industry Act, especially section 14a. A draft presented in December would have made it possible to temporarily disconnect “controllable consumer devices” such as wallboxes and heat pumps in buildings from the grid by remote control. And this for up to two hours a day, if there was otherwise a risk of local overloading of the grid. Then a few days ago, it became clear from a number of reports in the German media that the “working level draft” had not found the “minister’s approval” and was thus withdrawn by the German Federal Ministry of Economic Affairs.

This is a decision that Damasky welcomes and links to a demand for “more intelligent solutions”. “We are of course happy to have the discussion with politicians and energy suppliers,” Damasky said. “It is necessary to talk together about smarter models and not simply cap peaks. This can be done via price incentives or intelligent load management.”

That politicians and the industry should put their focus on battery-electric cars and the necessary framework conditions for them is also demanded by the chairman of the transport committee in the German Parliament, Green politician Cem Özdemir. “I strongly advise speaking the truth openly: Hydrogen and synthetic fuels are very exciting. Because of the drama of climate change, we will also need all of it, but not all of it everywhere,” Özdemir told electrive.net LIVE. “We need to invest our money well and should not ignore physics: In the case of passenger cars, battery-powered mobility has prevailed.”

With a view to the upcoming federal elections this year – probably also hoping for a Green government participation – Özdemir added: “This will also be the stance of the next German government. I advise everyone to orientate themselves on this. Anyone who says otherwise no longer wants the German car.”

Siemens to fit out Aral stations with grid connection for HPC