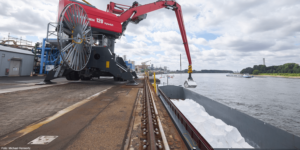 Covestro and the Dutch logistics service provider Netherlands Partikuliere Rheinfahrt-Centrale Coöperatie (NPRC) want to convert the salt transport fleet on the Rhine to hydrogen-powered ships in a joint project.

The project is part of the RH2INE initiative. Covestro and NPRC are supporting the development of a hydrogen infrastructure at ports and loading stations along the Rhine. The first two zero-emission ships are scheduled to sail between the Netherlands and Covestro’s three Lower Rhine sites as early as 2024.

In terms of transport volume, salt is the most important raw material for the sites in North Rhine-Westphalia, Covestro says. With the two ships initially announced, questions of technical and economic feasibility are to be clarified – among other things, the design of the ship hulls is to be optimised so that the ships can be used even at low water. In addition, it is to be examined whether green hydrogen from Covestro’s own chlorine electrolysis could be used for refuelling. According to the statement, more ships are to follow later.

“We want to anchor the principle of Circular Economy within our entire company and produce in a greenhouse gas-neutral way in the long term. This also involves the continuous reduction of indirect emissions, where we want to implement innovative solutions together with strong partners such as NPRC,” says Klaus Schäfer, Chief Technology Officer of Covestro AG.

According to Femke Brenninkmeijer, CEO of NPRC, the partnership forms a solid basis “take on the significant investment that the switch to zero-emission transport requires.” In other words, without Covestro’s support, the hydrogen-powered barges would probably not be feasible.

The RH2INE (“Rhine Hydrogen Integration Network of Excellence”) project was announced in February 2020. 17 partners want to make the Rhine-Alpine corridor a purely hydrogen-based transport route – by water, road and rail.