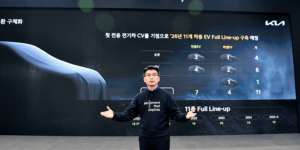 Kia has once again updated its strategic plan ‘Plan S’ and extended it to the year 2030. The plan includes expanding future mobility services, and new targets for sales of electrified vehicles, which includes both electric cars as well as purpose-built vehicles (PBV) in the commercial and sharing sectors.

By 2030, electric and hybrid vehicles are to account for 40 per cent of the brand’s total sales, with an annual sales target of 1.6 million units. More than half of these, 880,000 units, are to be purely electric vehicles. Adding internal combustion vehicles, Kia aims to sell 2.92 million units.

In the company’s update in September 2020 (then up to 2027), it only mentioned only seven “dedicated BEVs”, after talking about eleven electric models when the “Plan S” was unveiled in January 2020. Now Kia has clarified that it will be seven models on the stand-alone electric platform and four electric cars on combustion platforms. The eleven electric cars are to be on the market by 2026, while the manufacturer has not yet announced what Kia plans to do with the models in the period 2026 to 2030.

With the E-GMP and resulting electric cars, the Korean company want to set “new standards in terms of all-electric range, driving performance, interior space and technical application”. Over-the-air updates and features on-demand are also to be offered in these models. The Kia CV is to be equipped with a Level 2 Highways Driving Assist, and from 2023 Kia electric cars are to be capable of Level 3 driving.

Either side of the E-GMP – ie. electric vehicles that are both larger and smaller than electric cars – Kia plans to further expand its PBV business through open innovation by cooperating with other companies to develop both micro and large skateboard platforms for unmanned delivery and e-commerce sectors. This seems to involve both vans and small last-mile delivery vehicles as well as larger flexible passenger or delivery vehicles.

In terms of larger vehicles, there is already the Kia-Hyundai investment and engineering partnership with Canoo, whereby Canoo and Hyundai will co-develop an electric vehicle platform based on Canoo’s skateboard technology to be used for upcoming Hyundai and Kia EVs and PBVs (Purpose Built Vehicles). Canoo just brought out a multi-purpose delivery van late last year.  Another larger example, this time more for electric buses and vans, is the innovative British commercial vehicle maker Arrival. Hyundai and Kia invested 100 million euros in the British electric vehicle developer.

Kia says that it will also advance its own highly scalable small board platforms and technologies with big expectations for demand in this market demand which Kia-Hyundai say will see a significant increase globally. To stay ahead of this upward curve, Kia will unveil its first purpose-built vehicle (PBV) in 2022, whereby the strategy seems to involve launching further PBVs according to market needs.

Here the briefly-mentioned targets are ambitious: the company says it aims to become a world leader in PBVs. Without going into detail of what kind of vehicles this will be – the diversity of vehicle types here would be enormous – Kia just says it will develop a variety of specialised vehicles based on its PBV-dedicated skateboard platforms.

Kia CEO Ho Sung Song says: “Kia is being reborn in 2021 with a new logo, new design, and new corporate name.” He explained that, “Kia will transform into a brand that excites and inspires customers with innovative mobility experiences.” Earlier this year, the brand gave itself a new logo and dropped the ‘Motors’ from its company name in the process.

This also marks a continuous business and manufacturing expansion beyond private car sales. Not only is the Korean company diversifying its vehicle types, but it is also expanding its diverse business models.

In expanding its future mobility services, the company’s strategy is to gain a competitive edge by targeting and focusing on core areas. This means expanding existing services in the business-to-consumer domain, such as expanding the company’s flagship car-sharing service Wible in Spain with Wible Más and Wible Empresas (which is apparently still a working title). This is all very new, we mentioned Wible very briefly in our report on car-sharing business in Europe last year.

Kia will be focussing on Europe for its car-sharing service KiaMobility launched in September last year as a pilot project in Italy and Russia. Here the company only said that this will be expanding into other Europe markets without giving further details.

In the areas of business-to-government and business-to-business, Kia is aiming to launch an EV-based service that combines both subscription and car-sharing business models. The company’s new mobility service concept involves utilising vehicles that are used for business on weekdays and to be rented by individuals on the weekends.

In 2019, Kia introduced a subscription program ‘Kia Flex’ in Korea. Now, the company’s mobility services will be expanded with the launching of a global version under the name ‘Kia Subscription.’  This is planned for later this year and will be operated by Sixt Leasing, which was acquired by Hyundai Motor Group last year. In terms of vehicle types and where they will come from, the company has a global strategy to work regionally, so vehicles will be provided by the company’s regional affiliates and dealers.