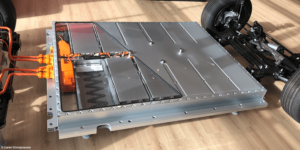 Ford has decided to build its first purely electric small car at the Fiesta plant in Cologne. According to industry insiders informing a media report, the US carmaker is also moving away from planned hybrid cars in favour of electric models.

Regarding the small, purely electric car in built in Cologne, Germany, the German publication Automobilwoche quotes a person close to Ford as saying: “The matter has been decided, the electric ar based on Volkswagen’s MEB is coming to Cologne.” The decision is to be officially announced next week at a digital press conference. There were already corresponding rumours several months ago: At the end of November, several media sources reported that not only the development of Ford’s future MEB-based BEV would take place in Cologne-Merkenich, but also included the production. The report asserted that in addition to Cologne, Saarlouis, which lies a good 200 kilometres to the south, and the Romanian plant in Craiowa were in the running as production locations.

In June 2020, Ford and Volkswagen signed the contracts for their global alliance in the fields of electrification, light commercial vehicles and autonomous driving, paving the way for a Ford electric vehicle based on the MEB. The plan is to bring the MEB battery-electric vehicle to market in 2023. The American company expects to deliver more than 600,000 units of the model within several years, which is to “combine a generous amount of space with the advantages of electric drive”.

Volkswagen describes Ford’s use of the MEB platform as “an important cornerstone in Volkswagen’s electromobility strategy”. We have already written in detail elsewhere about the motivation of both groups to ally themselves in this way in Europe.

The current report in Automobilwoche also reveals that Ford wants to say goodbye to pure combustion models faster than previously planned and has also decided to cancel already planned hybrid models in favour of pure electric vehicle models. “Previously, the plan was to launch one new electric model and one new hybrid model in each of the years 2023 to 2026. These new hybrid vehicles will now no longer be available,” the insider told the German magazine.

So far, Ford is building the Mustang Mach-E electric SUV in Mexico and expanding the Michigan plant for the production of an electric F-150 from 2022. The E-Transit is to be built in Missouri from the end of 2021 (for Europe, the E-Transit is to be assembled in Turkey). In addition, two plants in Canada will be retooled, where, among other things, electric SUVs for the Lincoln luxury brand are to be built from 2024 – but under Ford’s own management, not together with Rivian as announced under Ford CEO Jim Farley’s predecessor Hackett. In addition, Ford announced a few days ago that the Mustang Mach-E will also be built in China for the local market.

Just how much Ford needs to catch up is shown by figures that Ford published recently in the context of the announcement of its business figures: Although the Mustang Mach-E was already presented in 2019 and promoted via several roadshows in the course of 2020, production is not yet really getting going. In January, 4,250 units of the electric SUV were built, bringing the total to around 11,000 so far. Around 5,000 have been delivered to dealers, but only 241 had been delivered to customers by the end of January – including just three vehicles in December 2020 and 238 units in January.

On the occasion of the announcement of the business figures, Ford also announced its intention to almost double the investment in the electrification of its vehicles to at least 22 billion US dollars by 2025.