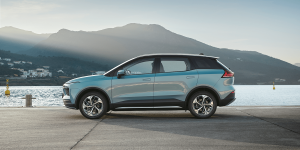 The Chinese electric car manufacturer Aiways has appointed a sales partner for Denmark. Andersen Motors will be responsible for service, advice and test drives at around ten locations in the country. It is the first such deal for Northern Europe.

Sales in Denmark will take place online, as in Germany, Belgium, the Netherlands and France. The Aiways U5 can be ordered in Denmark shortly. Prices for Denmark are not yet known. Andersen Motors is expected to announce them “shortly”.

According to the Aiways press release, Andersen Motors has a team of around 50 employees at ten locations and thus already “ensures nationwide support for Danish customers”. The spare parts business in the country is also coordinated via Andersen Motors.

“Denmark is in the process of developing a dynamic EV market,” says Alexander Klose, responsible for foreign business at Aiways. “New forward-looking legislative decisions and an intensive expansion of the charging infrastructure will increasingly stimulate it.”

The U5 electric SUV has been available to order in Europe since last year. The service partner in Germany is the electronics discounter chain Euronics.