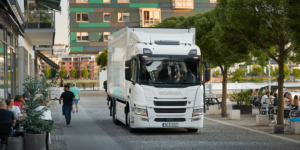 Volkswagen’s commercial vehicle subsidiary Traton has increased its investments in electromobility. The commercial vehicle manufacturer has now decided to invest 1.6 billion euros in research and development for e-mobility by 2025. Long-haul trucks will also be powered by batteries.

Until now, one billion euros had been earmarked for e-mobility until 2025. This budget has now been increased by 600 million euros or 60 per cent. Traton wants to concentrate on battery-electric vehicles and says that this will include vehicles for long-distance routes.

Traton CEO Matthias Gründler reiterated his clear commitment to electric trucks. “Traton is setting a clear focus on electric trucks. This transition will not happen overnight. ” Gründler said. “It will be gradual, sustainable, and in line with the required network expansion. If there is no charging infrastructure, it will not work”

Although the focus is on battery-electric drives – especially concerning localised distribution transport and city buses – Traton sees that hydrogen technology could bring its advantages in some applications. This would be the much-cited long-haul, but Traton still has some reservations on this front due to the loss of energy in hydrogen’s power-conversion. Nevertheless, the VW subsidiary concedes that hydrogen trucks are likely to establish themselves on the market in the next ten years. For some applications, hydrogen fuel cells may also be a more appropriate choice. Here Traton mentions long-haul coaches, as an example, where for battery-electric vehicles the “brief stops en route are not enough to charge them sufficiently,” the company says.

Competitor Daimler announced in September 2020 that it wanted to launch a hydrogen long-haul truck in the second half of the decade. However, the Stuttgart-based company relies on cryogenic liquid hydrogen stored at -253 degrees instead of high-pressure tanks. But Daimler also wants to bring a battery-electric long-haul truck with the eActros LongHaul.