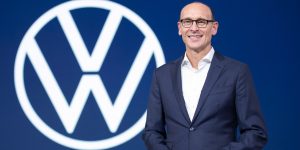 Following Audi’s lead, the Volkswagen brand VW no longer intends to develop new combustion engines. Further developments of the existing units would suffice, according to CEO Ralf Brandstätter, before VW is to become mostly electric.

In an exclusive interview, brand CEO Ralf Brandstätter said, “At the moment, I do not expect a completely new engine family to be launched.” Still, he wants to develop the engines currently in use and prepare them for new emissions standards such as Euro 7, the executive told the German-language publication Automobilwoche.

“We need them for a certain amount of time, and that’s when they need to be as efficient as possible,” Brandstätter said. He added that they would need these cars to make money “to finance the whole transformation.” Completely new engines were unlikely, he said.

This transformation is happening across the Volkswagen Group. Sister brand Audi announced a stop to the development of new combustion engines last week. Audi CEO Markus Duesmann justified the decision with the EU plans for a stricter Euro 7 emissions standard.

This standard is also Daimler’s benchmark. As Markus Schäfer, the company’s Chief Development Officer said in an interview at the beginning of March, Daimler will also no longer be developing a new generation of engines. In his view, the speed of the transformation will depend crucially on how strict the upcoming Euro 7 emissions standard actually is. The EU Commission intends to present a concrete draft by the end of the year. “Depending on which regulations are ultimately applied, the outlook for internal combustion engines could change dramatically once again – all the way to a scenario that makes it almost impossible to still register internal combustion engines after 2025,” says Schäfer.


None of the executives specified a definite date for when they would exclusively produce electric vehicles. Previous targets saw the VW Group launching the last combustion engine platform in 2026, then running until 2040. Whether that will be the case is now an open question. Audi and VW Passenger Cars are the Group’s key engine supplier that also hands down their developments to the sister companies such as Seat and Škoda – with these two withdrawing from new developments, the transformation may happen sooner.

This rate of acceleration was also seen at the Volkswagen Power Day on 15 March that puts a unified battery format at the core. On a similar note, Volkswagen Group significantly increased its electric targets for 2030, with 70 per cent of sales to be purely electric cars this year with battery demand to grow accordingly. At the most recent count, the VW Group reckons it would need 240 GWh of cells by 2030 and wants to cover this demand with six European gigafactories, each with an annual output of 40 GWh.

At VW, the brand has taken the lead in the Group when it comes to MEB models. They launched deliveries of the VW ID.4 this month and plans to deliver around 300,000 all-electric vehicles to customers this year. This includes 150,000 ID.4s, with the remainder likely to come from the ID.3, the first examples of the ID.5 in Europe and the ID.6 in China, as well as a few more e-Ups. There will also be about 150,000 hybrids. With the all-wheel-drive version ID.4 GTX, the coupé ID.5 and the ID.6 X/Crozz for the Chinese market, VW will be adding more electric models this year.