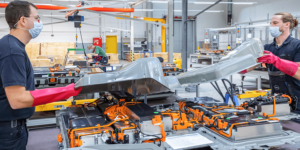 The so-called “Battery Refurbishment Centre” at Opel’s headquarters has been significantly expanded and modernised. All employees are now trained for high-voltage level 5. The centre in Rüsselsheim is responsible for Europe-wide customer care – so it looks after those cases “from Portugal to Poland” where dealers cannot help, Opel says.

“Over the years we have gained a lot of experience with lithium-ion batteries,” says Opel’s head of development Marcus Lott. “A failure is very rare, but if it happens, investigating the cause and making repairs are jobs for specialists. We now put our competence at the disposal of the whole company and provide fast support.”

In 2020, around a hundred defects were processed in Rüsselsheim, but probably the vast majority still from the Ampera and Ampera-e, as only the first examples of the eCMP-based Corsa-e were delivered last year. In the up to ten-year-old stock, some control units had to be replaced or “in the worst case” a battery cell had “gone”.

Such battery packs are then brought to Rüsselsheim and repaired there, as Opel states, battery packs of the brand may only be opened in the battery centre in Rüsselsheim. After the defective cell has been replaced, the “then fully efficient battery again” is stored as a replacement battery.

Paragon to offer batteries for EVs