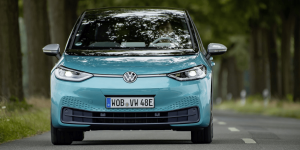 Volkswagen partner SAIC is reportedly planning to produce and sell the VW ID.3 in China. According to a Chinese media report, the model will be launched on the Chinese market this year. In addition, there are now more details on the VW ID.6, which is to be launched in China in April.

First, to the potential ID.3 market launch: According to the Chinese portal Auto Sina, SAIC is said to have confirmed the market launch of two other MEB BEVs in China in the course of test drives with the ID.4, including that of the ID.3 and that of the ID.6. Hints of a China debut of the ID.3, which is actually only intended for Europe, have been made time and again. Last November, the German publication Automobilwoche reported with reference to Christian Dahlheim, Head of Group Sales, that the ID.3 would be launched on the Chinese market in the fourth quarter and would be produced at the SAIC-VW plant in Anting.

So far, the ID.3 has only been built in Zwickau. According to Auto Sina, the fact that the Hongguang MINI EV from SAIC-GM-Wuling recently became the best-selling electric car in China has contributed to the rethink. The VW ID.3 can also boast the same qualities – including an affordable price. According to Auto Sina, the ID.3 will be available in 58 and 77 kWh battery options for China.

According to InsideEVs, there is also news about the ID.6, which is initially only planned for the Chinese market and will be available there in autumn as the ID.6 X / Crozz. As with the ID.4, there will be a SAIC-VW and a FAW-VW version. The purely electric seven-seater SUV will be equipped with NCM cells from CATL and have a battery capacity of 84.8 kWh.