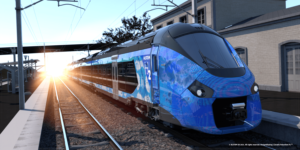 Alstom has received its first orders for hydrogen trains in France. On behalf of four regions, the state railway company SNCF has ordered the first twelve trains developed by Alstom to run on both overhead lines and hydrogen. The order is worth almost 190 million euros.

The SNCF subsidiary SNCF Voyageurs, representing the regions Auvergne-Rhône-Alpes, Bourgogne-Franche-Comté, Grand Est and Occitanie, is the contracting authority. Three of the trains are to be used in each region. In addition to the twelve trains, the contract with Alstom also includes an option for two more sets of trains, which would then be used in Grand Est.

As far as the timetable is concerned, test runs are planned from 2023 and commercial service runs from 2025. The trains will be used on the regional express routes Montréjeau-Luchon (Occitanie), Clermont-Ferrand-Lyon (Auvergne-Rhône-Alpes), Auxerre-Laroche-Migennes (Bourgogne-Franche-Comté). The Grand Est region has not yet specified the location of its future trains.

The rail vehicles for France are hydrogen trains based on Alstom’s Coradia Polyvalent regional train platform, known domestically as “Régiolis”. According to Alstom, around 400 Coradia Polyvalent with dual-mode electric diesel or all-electric drive have already been ordered within France since 2011. By “dual mode”, Alstom refers to the feature of being able to draw fuel both from the overhead line and from a source on board. With the hydrogen variant, which is also a dual-mode train,  Alstom is expanding its portfolio. In addition to the above-mentioned order, according to the manufacturer, other French regions have meanwhile expressed their interest in participating in a second phase of the project.

According to Alstom, the Coradia Polyvalent H2 has an autonomy of up to 600 kilometres on non-electrified railway lines. As a four-car train with a length of 72 metres, it has a capacity of 218 seats and has “the same dynamic performance and comfort level of the dual-mode electric diesel version”, says an accompanying press release. Alstom does not get more specific on this point.

The Coradia Polyvalent will adopt the FC drive technology from the Coradia iLint developed for Germany. Alstom has already taken the same approach with an order from Italy. The FC technology from the Coradia iLint will also be found in the Coradia models there. “Alstom is the first rail company in the world to launch a hydrogen train onto the market and to master this technology through its iLint train, developed for the German market,” comments Jean-Baptiste Eyméoud, President of Alstom in France. “This new order for the French market is fully in line with Alstom Group’s ambition to become number one in the green and smart mobility market and to help roll out an efficient hydrogen ecosystem in our regions.”


As a home market, France naturally has a special role. The development and production of Coradia Polyvalent trains secures more than 2,000 jobs in France for Alstom and its suppliers, the statement added. Six of Alstom’s 15 sites in France are involved in the project: Reichshoffen (Bas-Rhin) for design and manufacturing, Ornans (Doubs) for engines, Le Creusot (Saône-et-Loire) for bogies, Tarbes (Hautes-Pyrénées) for drive chains, Villeurbanne (Rhône) for on-board electronics and Saint-Ouen (Seine-Saint-Denis) for design.

The project participants have the support of the French government, which in 2020 adopted a cross-sectoral hydrogen roadmap. “France has everything it needs to become a hydrogen champion: the French government is fully committed to turning this ambition into reality,” says Jean-Baptiste Djebbari, Assistant Minister for Transport, French Ministry for the Ecological Transition, now on the occasion of the H2 train order. According to him, the government will cover €47 million of the development costs for France’s first hydrogen-powered regional train.