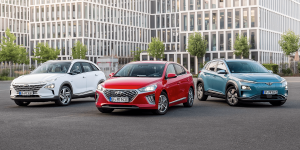 Hyundai Motor UK has reduced its electric car range prices following changes to the government’s Plug-In Car Grant. This includes both the Kona and Ioniq EV adjusted to meet the requirements, excepting only the top-specced version as too expensive.

++ Kindly find all updates below this article. ++

As many other manufacturers selling their EVs in the UK have done, Hyundai has now also reacted to the revised Plug-in Car Grant policy, which has prompted several manufacturers to adjust their prices to meet the pricing demands set by the new PiCG. The idea is that subsidies should not offset luxury vehicle production, instead focusing on a broad transformation of the traffic system and its environmental impact.

The Ioniq Electric range saw its prices cut for the Premium model to £32,995 and the Premium SE to £34,995. The Kona Electric 39KWh prices were also reduced, with the SE Connect now costing £30,395 and Premium at £31,745 (before the first registration fee is applied). The Kona Electric 64KWh, capable of travelling up to 300 miles on a single charge, now costs £34,995 in Premium specification. Only the top-spec Ultimate version is too pricey for the grant, at £37,145.

“When it comes to electric vehicles, the cost is a big consideration for customers, so we’re delighted to be able to maintain the savings of our electric models under the new plug-in car grant,” said Hyundai Motor UK’s managing director, Ashley Andrew. “Ioniq Electric and Kona Electric are among the most popular zero-emissions vehicles on sale today, and by maintaining the choice and the value available to customers in our EV range, Hyundai Motor UK will remain on track to be one of the largest suppliers of electric vehicles in the country.”

Following Hyundai and other carmakers, Kia has also adjusted pricing for the Soul EV in the UK. The Korean company announced a price reduction of more than 5,000 pounds to bring the electric car within reach of the adjusted plug-in car grant (PiCG).

Westminster lowered the price cap for eligible electric cars from £50,000 to £35,000 in March, meaning the Kia crossover, previously priced from £37,545, was only available at its full list price.

Kia UK has today introduced the Soul EV ‘Maxx’, replacing the ‘First Edition’ variant in the UK line-up that was the only one available since the electric car’s launch.

What’s different is the new Kia logo and two metallic colour finishes on offer now. However, Kia kept the technology the same, including a 64kWh lithium-ion battery pack, delivering a range of 280 miles (WLTP, combined).

Kia said it sold more than 900 Soul EVs in the UK so far in 2021. It is one of two fully electric models offered by Kia UK, alongside the e-Niro electric crossover. The Soul EV and e-Niro will be joined later in 2021 by the Kia EV6, the first electric car to utilise the new 800-Volt platform the Korean company shares with Hyundai.

Kia is preparing to introduce its first dedicated electric car, the EV6, later this year, as reported. Priced from £40,895, it will not be eligible for the grant, and Kia has not indicated that it plans to offer lower-priced models.