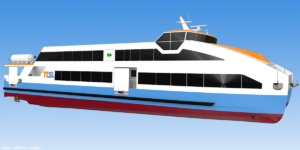 ABB has won an order from Spanish shipbuilder Astilleros Gondán to supply all-electric power solutions for ten all-electric local ferries. The vessels are scheduled to enter service on the River Tagus between 2022 and 2024.

The ten electric ferries will be operated by the Transtejo transport company and replace existing diesel ferries in its fleet. The 40-metre long barges will all be used on the three main routes between Lisbon and Cacilhas, Seixal and Montijo, where they will transport up to 540 passengers across the longest river on the Iberian peninsula.

ABB describes the ferries as the “core of Lisbon’s public transport system”. The scope of supply, which has now been contractually fixed, includes the fully integrated electrical power supply solution and the integrated ship and propulsion automation system for all ten ferries, as well as the battery pack for the first ship in the series. ABB estimates the energy content of the battery packs at 1,860 kWh. In operation, the ferries should later be able to call up a speed of 16 knots.

“Cutting greenhouse gas emissions are top priorities in urban planning,” says Antonio Pacheco, head of the GRP division at the Astilleros Gondán shipping company. Today, the technologies for ferries travelling so close to the city centre have to be clean and environmentally friendly. At the same time, they also have to meet safety and reliability requirements. “ABB has been selected both on the grounds of energy efficiency and its extensive experience in delivering all-electric and hybrid propulsion solutions to the ferry market,” says Pacheco.

“Operators serving inland waters have been among the pioneers of zero-emission propulsion, and we are truly honored that ABB’s technology will support the sustainability goals of one of Europe’s great capitals,” adds Juha Koskela, head of ABB’s Marine & Ports division. “This project is another important industry milestone for zero-emission propulsion, showing that proven technology is available today to serve future needs on sustainable fast passenger ferry transport.”

Just a few weeks ago, ABBMarine & Ports announced another order from South Korean shipyard Haemin Heavy Industries. The subject of the supply contract is a complete solution for the power supply and propulsion of the Busan Port Authority’s first all-electric passenger ferry. ABB is also involved in the European innovation project Flagships, which will see the world’s first hydrogen-powered commercial cargo ship enter service on the Seine in Paris later this year.