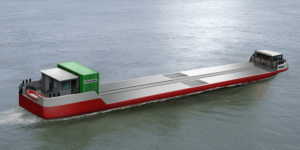 Within the framework of the European innovation project Flagships, the world’s first commercial cargo ship with hydrogen propulsion is to go into operation on the Seine in Paris this year. This has significantly shifted the focus of the project initiated in 2018.

The original plan was to deploy a hydrogen tugboat in the Lyon region. Instead, a hydrogen-powered cargo ship is now to be commissioned to transport goods on pallets and in containers on the Seine. The French inland navigation company Compagnie Fluvial de Transport (CFT), a subsidiary of the Sogestran Group, is acting as the owner of the new vessel.

“The project’s initial plan was to deploy a hydrogen tug boat in the Lyon area, but as the broader potential for hydrogen in cargo transport emerged, the demo tug boat was changed to an inland cargo vessel,” the initiators explain in a statement. The shift in focus is based on the experience of the Sogestran Group in Belgium, where another subsidiary called Blue Line Logistics (BLL) operates cargo vessels under the concept name ‘Zulu’. As part of the Flagships project, a hydrogen power generation system is now being installed on a ‘Zulu’ currently under construction. Delivery and commissioning in Paris is planned for later this year.

“The vessel will operate on compressed hydrogen produced from electrolysis, enabling not only zero-emission operations but also creating a solid base for more local zero-emission transport, both at sea and on land,” the project participants share. The power generation system for the cargo ship will be supplied by ABB Marine & Ports, the fuel cells by Ballard, the hydrogen by suppliers from the Paris region. A ‘Zulu’ ship from BLL with a conventional engine has already been in operation in Paris for a good year.


Funded by the Fuel Cells and Hydrogen Joint Undertaking (FCH JU), Flagships will receive €5 million in funding for the deployment of two hydrogen vessels in France and Norway. The consortium behind the project comprises eleven partners, including shipping companies Norled and CFT, as well as ABB and Ballard.

Just a few days ago, news about another hydrogen shipping project was released about the H2 catamaran Energy Observer. This catamaran is able to produce its own fuel from seawater while underway. Toyota Motor Europe is a new shareholder in the start-up Energy Observer Developments (EODev). The French company was founded in 2019 with the aim of advancing the research and development of the H2 catamaran, for which Toyota supplies fuel cell technology.