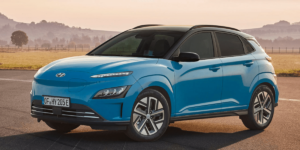 Hyundai Motor has entered into a strategic partnership with Uber in Europe. Through this cooperation, Hyundai will offer Uber drivers discounted access to its Ioniq Electric and Kona Electric models, as well as future all-electric vehicle models.

Hyundai says in a statement that the discounted terms will apply to “thousands of Kona Electric and Ioniq Electric” for drivers in the UK, France and the Netherlands. The South Korean company has not yet revealed how the perk will be structured in detail.

In this strategic partnership, Hyundai and Uber “will explore how working together can accelerate the adoption of Hyundai BEVs and electric vehicle infrastructure in European cities”. Test drives, joint marketing and training programs to promote electric cars and their associated benefits to Uber drivers are already being planned

The agreement between the corporations comes against the backdrop of Uber’s announcement that it aims to become a zero-emission mobility platform in Europe by 2030. In the interim, half of the total aggregated kilometres of Uber rides in seven European capitals will be driven by electric vehicles by 2025. Uber estimates that these cities – Amsterdam, Berlin, Brussels, Lisbon, London, Madrid and Paris – are expected to account for about 80 per cent of Uber’s European business by the end of 2021. Part of the initiative also means that customers will be given the option to explicitly order a zero-emission vehicle when booking their ride with a function called Uber Green. After the launch in 15 cities in September last year, Uber expanded its Uber Green roadmap for North America in January this year. The company announced that it would make the service available in 1,400 more cities in North America. As the first location in Europe, Uber Green launched in London two weeks ago. Uber says that they will have the service up and running in 60 major European cities by the end of the year.

Uber has announced pilot cooperations with OEMs on a number of occasions – for example with Volkswagen. In May 2020, the two corporations pushed a pilot project to deploy up to a three-digit number of e-Golf in Berlin. Whether the pilot will lead to such a strategic partnership with Volkswagen is unclear and now perhaps unlikely – the collaboration with Hyundai has now moved well beyond the pilot phase. Uber did not mention planning any similar cooperation with other OEMs.

“Through this exciting partnership, we will utilise our leadership in electro-mobility to help Uber’s partner drivers make the switch to BEVs and help electrify their customers’ journeys in Europe,” says Michael Cole, president and CEO of Hyundai Motor Europe. This agreement, he said, gives his company the opportunity to showcase the benefits of the Ioniq Electric and Kona Electric to an even wider audience and contribute to decarbonisation efforts in major cities across Europe.

Anabel Diaz, Uber’s regional manager for EMEA, adds that the new partnership will drive the electrification of the Uber platform across Europe and make it easier and more affordable for drivers to switch to one of Hyundai’s leading electric models. “With our responsibilities to drivers, riders and cities in mind, we have made a series of ambitious commitments to support drivers switch to electric vehicles, and this partnership will enable us to continue this momentum. Professional drivers such as those on the Uber app will be the early mass adopters of electric vehicles, which will help to drive the mass market in the years to come.”