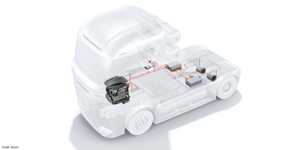 According to an official statement, Bosch Hydrogen Powertrain Systems will supply “as many Chinese vehicle manufacturers as possible” with fuel cell systems. The components required for this, such as fuel cell stack, air compressor with power electronics and control unit with sensors, will come from Bosch, mainly from the plant in Wuxi. Small-series production will start there this year. The market launch of the fuel cell system itself is planned for 2022/2023.

Bosch has also announced a test fleet of 70 Qingling trucks with its own FC technology for 2021. “We are now literally picking up speed in the industrialisation of the fuel cell. Innovative technologies and strategic partnerships are the ideal fuel for rapidly achieving the goal of making road traffic as climate-neutral as possible,” says Stefan Hartung, Bosch board of management member and chairman of the Mobility Solutions division.

Bosch has been working with Qingling for years in the areas of fuel injection and exhaust gas after-treatment. Du Weidong, chairman of Qingling Motors says “The recent cooperation not only represents a milestone on the path to the industrialization of the mobile fuel cell, but also a significant contribution to the further development of the Chinese automotive industry.”

Bosch is contributing its fuel cell expertise to the joint venture. Bosch says that as a premium manufacturer Qingling has a complete portfolio from light to medium to heavy trucks, as well as being very committed to electrification and is familiar with the Chinese truck market. “China is the most important growth market for electromobility,” Hartung says. “Especially for large, heavy vehicles that travel long distances, the fuel cell offers clear advantages over the battery-electric powertrain.”


When the Chinese manufacturer Great Wall Motor recently announced at the presentation of its H2 strategy that it would launch its first hydrogen-powered SUV model on the market before the end of 2021, as well as 100 FC heavy-duty trucks on the roads, Bosch, among others, was named as a project partner but it was not said in which role.

According to its own statements, Bosch is continuously investing in the FC sector, so far mainly in research and development. Last year, for example, the company built a fuel cell centre in Wuxi. Now it is a matter of preparing the necessary production capacities for components that are also to be supplied to the new joint venture, Bosch says.

Bosch is also working on the industrialisation of fuel cells at its German locations in Bamberg, Feuerbach and Homburg. Bosch is currently developing the fuel cell stack to market readiness with the Swedish specialist Powercell in order to subsequently manufacture it in large-scale production on its own from 2022 onwards. Bosch ordered stacks worth a good million euros in total from Powercell last year. By flexibly combining two or more stacks, the duo aims to cover a performance portfolio ranging from passenger cars to heavy trucks. While Bosch has exclusive rights for road vehicles, PowerCell will sell the technology for other segments.

Bosch Hydrogen Powertrain Systems, the joint venture established by Bosch and commercial vehicle manufacturer Qingling Motors in China, has begun construction of its site in Chongqing. Research and development, testing, production and sales will be bundled at the new centre, which is scheduled for completion by May 2023.

Bosch expects that by 2030 about one in eight newly registered commercial vehicles worldwide will be powered by a fuel cell. In order to further advance the industrialisation of hydrogen drives in China, Bosch says it has started planning the new site from mid-2021.