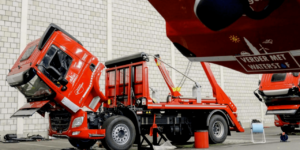 The US manufacturer Hyzon Motors has started production of 15 FC vehicles for delivery to the Dutch city of Groningen. The delivery of the first vehicles is planned for the third quarter of 2021. The remaining vehicles are to follow by the end of the year.

The vehicles on order are five vans and ten medium- and heavy-duty municipal vehicles, including water, refuse, hook-lift crane and delivery vehicles. The client is the city of Groningen, the dealer is ESA from Groningen. Hyzon Motors Europe, the joint venture between Hyzon Motors and Holthausen Clean Technology is also based in the Dutch city and is responsible for the contract execution.

The vehicles will be partly built at Hyzon’s Groningen production facility. Hyzon Motors Europe will take care of the development and production as well as the delivery of the vehicles. When the European subsidiary was founded in mid-2020, Hyzon had already announced that the fuel cell drives would be built in the USA and that the assembly of the trucks and buses would be carried out by partners. In Europe, Holthausen Clean Technology builds the Hyzon trucks on the basis of DAF’s XF Space Cab tractor unit.

Groningen is also where Hyzon also has its European headquarters. The Dutch city is known for its high sustainability ambitions in the transport and energy sectors. The municipality has more than 300 vehicles in its fleet, including ten fuel cell vehicles already purchased from Holthausen Clean Technology. Groningen has set itself the goal of completely ridding the city centre of carbon emissions by 2025 and the entire city area by 2035.

In February of this year,  Hyzon announced its IPO and reported an order from New Zealand for a total of 1,500 fuel cell trucks. In the United States, the company has two facilities in Rochester, New York State. One is a fuel cell testing facility, while the other facility houses the administrative headquarters, vehicle production and powertrain assembly. In addition, Hyzon is currently planning to build a production facility for membrane electrode assemblies (MEA) in Illinois.

In Europe, the company very recently launched a leasing service for heavy-duty fuel cell commercial vehicles. Here, the manufacturer says it aims to reach the level of diesel trucks in terms of total cost of ownership and plans to deliver “hundreds of heavy-duty fuel cell vehicles” in Europe by the end of 2021.

Hyzon Motors is riding on the upsurge of global demand for zero-emission commercial vehicles, particularly underrepresented in long-haul vehicles. The Horizon Fuel Cell Group launched Hyzon Motors almost exactly a year ago in March 2020 to focus on heavy-duty FCEVs using fuel cell stacks exceeding 100kW. The Hyzon vehicle line includes trucks from 15-40 tonnes. Hyzon claims to be the first US manufacturer to specialise in PEM fuel cell modules with more than 100 kW – technology that comes from the parent company, Horizon Fuel Cell.

Including reporting from Cora Werwitzke