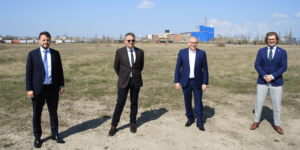 AMG Lithium GmbH, a subsidiary of the Dutch Advanced Metallurgical Group (AMG), has acquired a plot of land in the Bitterfeld-Wolfen Chemical Park. A lithium hydroxide plant is to be built there by 2023, not far from the planned battery plant of Daimler partner Farasis.

AMG Lithium will build a production plant for battery-grade lithium hydroxide on this plot. The aim is to supply the European battery industry with this key raw material reliably and with short delivery routes. Initially, a plant with an annual capacity of 20,000 tonnes will be built on the site, which is scheduled to go into operation in 2023. The size of the site is such that the annual capacity can be increased to up to 100,000 tonnes in subsequent years through the addition of further modules.

Where AMG Lithium, based in Frankfurt’s Industriepark Höchst, plans to source the raw materials is not clear from the land purchase announcement. Lithium hydroxide is used in the field of electromobility for the production of cathode materials. For the “battery quality”, only very few impurities may be contained, as AMG Lithium emphasises. The plant in Bitterfeld-Wolfen is also to be the first lithium refinery in Germany.

“By locating AMG, we will further expand our position in the energy materials sector,” says Patrice Heine, managing director of Chemiepark Bitterfeld-Wolfen GmbH. “We are currently feeling a lot of momentum in the segment, be it new battery materials or porous materials for capacitors, for example.” In the medium term, he said, the aim is to bring the entire value chain for battery materials to the site, including a recycling project for a sustainable circular economy.

The lithium hydroxide from the AMG plant could be further processed directly at the chemical park in the future. In May 2019, the Daimler partner Farasis Energy from China announced that it would build a battery factory there. The plant, which according to information at the time is to go into operation at the end of 2022, is to manufacture not only cells but also modules and packs – initially with a capacity of 6 GWh, later with 10 GWh per year. In mid-February 2021, however, it became known that no building permit had yet been granted.

AMG Lithium has started construction of its announced lithium hydroxide plant in Bitterfeld-Wolfen (Saxony-Anhalt). The plant is scheduled to go into operation in autumn 2023. The Bitterfeld plant will initially be designed for an annual capacity of 20,000 tonnes. This will allow batteries for 800,000 electric cars to be produced. As reported above, however, the site is designed to increase production fivefold to up to 100,000 tonnes later. The raw material will be delivered from a mine in Brazil.

AMG Lithium is investing about 120 million euros at the site and wants to create 80 jobs. The European battery industry will then be supplied with lithium hydroxide from Bitterfeld-Wolfen – for electric car batteries, but also consumer electronics. Local processing is currently not in sight, as Farasis Energy, as reported, is currently no longer pursuing its battery factory plans for Bitterfeld-Wolfen.