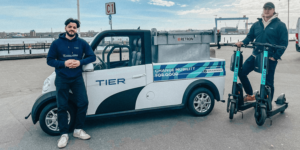 Micromobility provider Tier Mobility has partnered with Ari Motors and Ono to electrify the fleet for operational use. Tier staff will employ electric transporters from Ari and cargo pedelecs from Ono to exchange the batteries and kick scooters in the fleet.

Greening the operations behind running a fleet of light electric vehicles electric has been a hidden issue for some time. According to employees, Jump/Lime in London only now uses third-party operators with electric vans to collect bikes or change batteries.

By teaming up with Ari and Ono, Tier keeps the business in smaller hands and says it was expanding its operations fleet with electric transporters and electric cargo bikes. “Various electric vehicles are now in use in several German and European cities for charging and maintaining the e-scooter fleet,” says Tier. The company names the German city of Kiel as an example where they were receiving “a lot of positive feedback when we drive through the city to swap the e-scooter batteries,” with an electric van, explains Fabian Kaiser, Operations Manager Schleswig-Holstein. Speaking to electrive, the company’s spokes person Florian Anders later added that they had 39 electric vans on order to be deployed all over Germany but also in Helsinki.

The ARI 458 is considered an agile van with a top speed of 80 km/h, 530 kg payload, and a 250 km range. The electric vans can be recharged in about 6-8 hours at a standard household socket, making them ideal for the operational use of the e-scooter fleet, says Tier. 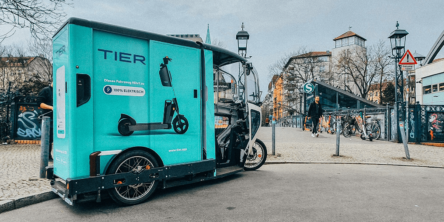 The Ono electric cargo bike is in use in Berlin and Munich, according to the company. It comes as a three-wheeled transporter version but remains classified as a bicycle/pedelec and can carry loads up to 200 kilograms. All attributes that help Tier employees navigate dense urban traffic and go where the scooters went.

Tier says its effort to make the business more sustainable goes back to July 2020. Together with fellow micromobility providers Dott and Voi, Tier committed to higher levels of sustainability standards. The ten environmental pledges include never demolishing an e-scooter, fully running operations on green energy by the end of 2020 and not relying on gig workers. Other commitments will see them buy only scooters with swappable batteries and use only electric vehicles for recharging and maintaining the fleet.

The aim is to complete the fleet swap by the end of 2021. Voi already achieved a zero-emission operation in Paris in 2019 using electric vans as reported. The company has since retired from the French capital after outrage over clutter from too many providers. Lime, Tier, and Dott then won a 2020 tender to operate in Paris under specific rules reportedly.

Still, there is some way to go. Berlin-based Tier Mobility operates in more than 95 cities in twelve countries, including Germany, France, Austria, all Nordic countries and York, in the UK. Its kickscooters also made it to Abu Dhabi, UAE.