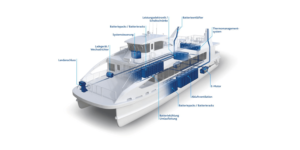 XALT Energy is contributing the batteries for New Zealand’s first all-electric ferry. The 19-metre vessel with a capacity of 135 passengers will be part of the fleet of ferry operator East by West Wellington Harbour Ferry Service and will cover daily water routes in the bay off Wellington.

The ferry will have 72 liquid-cooled battery packs on board, providing around 550 kWh of energy and powering two twin electric motors. The McKay Group, an electrical engineering company specialising in sustainable transport solutions, is responsible for integrating the batteries into the design of the vessel. Specifically, the battery packs were divided between two battery rooms and interconnected.

The ferry also has a lightweight, canoe-shaped displacement hull made of carbon fibre and is capable of reaching an operating speed of 20 knots. It can operate continuously for one hour between loading operations. Specifically, she will be deployed on a route between the Queens Wharf and Days Bay piers, where she is expected to complete nine trips daily.

“We are proud to play such a crucial role in this environmental milestone,” expresses Felix Nelius, Sales and Application Engineering for Battery Systems at XALT Energy. With the McKay Group, XALT Energy shares the goal of offering sustainable energy options to customers around the world. “As a result, this should lead to further projects in the marine industry and we are already looking forward to working with McKay Group again,” Nelius looks ahead.


Around six months ago, XALT Energy was also chosen by ABB Marine & Ports to supply battery systems to power two hybrid ferries for UK ferry company P&O, which are expected to operate regularly on the English Channel between Dover in the UK and Calais in France from 2023.

XALT Energy itself became a subsidiary of Freudenberg Sealing Technologies (FST) in December 2018, but remains headquartered in Midland, Michigan. The company produces large-format lithium-ion systems and has its own cell production. XALT batteries are also used in other applications, such as city buses in New York and Los Angeles. In addition to battery technology, FST is also well-positioned in the field of fuel cells. The background to this is the acquisition of parts of FC manufacturer Elcore, which was pushed by the group at the beginning of 2018.

“The future of shipping is emission-free, quiet and either purely battery-electric or consists of a hybrid system in combination with a fuel cell,” Nils Martens, Head of Battery & Fuel Cell Systems at Freudenberg Sealing Technologies, already expressed on the occasion of the order from ABB. “Freudenberg can offer customers from the marine industry both types of systems and thus a lot of power, stability and performance.”

Freudenberg Sealing Technologies now intends to increasingly target other industries with its battery and fuel cell activities in addition to heavy-duty transport (for example the 40-tonne Energon). Last year, the company already initiated development projects for buses and cruise ships with partners such as Newflyer, FlixBus and Meyer Werft.