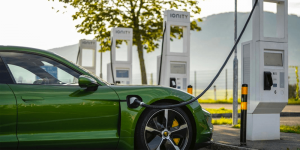 Porsche wants to build its own battery cell factory for the production of “high-performance batteries” in Tübingen, Germany. Although the Stuttgart-based sports car manufacturer plans to purchase batteries for its electric cars from parent company Volkswagen in the future, high-performance cells – that is “a Porsche domain”.

This was revealed by Porsche CEO Oliver Blume in an interview with the German publication Frankfurter Allgemeine Sonntagszeitung. He is also quoted in the article as saying: “Battery cells are a core technology for the German car industry, which we must also have in our own country. In development and in production. Porsche wants to play a pioneering role in this.” Porsche’s battery cell factory is to be built in Tübingen, “because we want to show that we can manufacture battery cells in a high-wage state like Baden-Württemberg”.

Porsche will also install batteries from the Volkswagen Group, he said. “But in addition, there will be a segment for high-performance cells,” Blume expressed. “Just as we have developed high-performance combustion engines, we now want to be at the forefront of high-performance batteries.” The Porsche boss does not mention a timetable for the construction and commissioning of the plant in the article. Neither does the planned production capacity.

The development does not come as a complete surprise: Porsche boss Oliver Blume had already announced at Volkswagen’s ‘Power Day’ in mid-March that Porsche wanted to pursue its own path in battery strategy – with a silicon-based anode instead of the usual graphite. At the time, Blume said that the Zuffenhausen-based company wanted to work on new materials and more efficient cooling solutions for performance cells for road sports cars and motorsport.

At the beginning of April, it became public that Porsche was about to found a battery joint venture called Cellforce Group together with Fraunhofer spin-off Custom Cells and the P3 Group. However, the application for this joint venture has since been withdrawn, as can be seen from the list of ongoing merger control proceedings at the German Federal Cartel Office. It is therefore still unclear on which structure Porsche’s battery cell plant in Tübingen will be based.

For its part, the Volkswagen Group had announced six European battery cell factories by 2030 at the ‘Power Day’ in March. So far, two of the six factories have been confirmed, with sites in Salzgitter and Skellefteå, Sweden. In Salzgitter, Volkswagen will manage cell production on its own and build the so-called “unit cell” there, while in Sweden the Wolfsburg-based company will operate together with the battery start-up Northvolt. It remains to be seen whether the Cellforce factory will count as the third of the six battery plants – these are supposed to have a production capacity of 40 GWh per year, which would be a high annual output for Porsche’s high-performance cells (for a few high-performance models and motorsport, mind you, not for every electric Porsche).

Until now, Porsche has purchased all its battery cells. These purchased cells are assembled into ready-to-install battery packs by Dräxlmaier near the vehicle plants and then delivered to the assembly line.