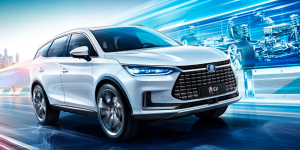 BYD achieved sales of around 41 billion yuan (approx. 5.1 billion euros) in the first quarter of 2021, slightly more than twice as much (+108 per cent) as in the same quarter of the previous year. Profit rose even more, although mainly because of one-off effects.

Profit rose by 111 per cent to about 237 million yuan (30.2 million euros) in the same period. According to the Chinese news site Gasgoo, if one excludes one-off effects, the company is left with a net loss of 81.6 million yuan (10.4 million euros),

The rising expenditure on research and development is also striking. At 1.22 billion yuan (154.7 million euros), this was 60.9 per cent higher than Q1 2020. With the development of new vehicles and battery technologies, BYD not only wants to strengthen its position in the Chinese NEV market but also drive its international expansion – such as in Norway. In China alone, four new BEVs are to be launched with the new Blade Battery. Several million are also likely to have been invested in the new 800-volt platform that BYD presented in April.

In the 2020 financial year, for which BYD presented its figures at the end of March this year, the company had turned over the equivalent of 20.3 billion euros, while profits climbed by 162.3 per cent to around 550 million euros.