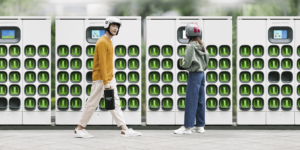 The Taiwanese electric scooter manufacturer Gogoro wants to bring its battery exchange network to China on a large scale. For this purpose, Gogoro has now joined forces with two large Chinese two-wheeler manufacturers. Recently, there was a similar deal for India.

In China, Gogoro is working with Yadea and DCJ. The core of the partnerships is that both manufacturers will develop electric two-wheelers for the Gogoro Network’s battery swap platform. DCJ and Yadea have also invested in a new company that will be responsible for providing and managing the Gogoro battery swap infrastructure in China.

Gogoro’s first battery exchange network is scheduled to be launched in a Chinese city this year. Other cities will follow in 2022. This is not only about battery swapping for sharing vehicles, but also for private users: since the battery is the most expensive component of an electric scooter, the vehicle can be offered at a much lower price without a battery. The customer then only pays for the use of the battery.

The batteries of the exchange system can also be used by other scooter manufacturers. The companies can either integrate the batteries into their existing drive system or purchase the entire electric drive system from Gogoro and install it in their vehicles. In this way, the Taiwanese company wants to make the transition easier for manufacturers of combustion scooters.

Gogoro CEO Horace Luke sees the announcement as nothing less than a “new era of sustainable urban transport” in China. “We all share an ambitious vision for changing how China’s cities operate in smarter and cleaner ways and the Gogoro Network was created to provide an easy path forward for simple and sustainable electric refueling of two-wheel vehicles with smart battery swapping,” Luke says.

Less than a month ago, Gogoro had entered into a very similar agreement with Hero Moto. Hero is one of India’s largest two-wheeler manufacturers. Together, “powered by Gogoro” exchange stations will be set up and corresponding Hero models will be launched. However, no figures or targets were given for the plans in India.