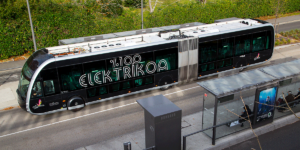 The new line is ten kilometres long, has 24 stations and is served by seven electric Irizar articulated buses. For Kéolis, it is the second such venture since opening a zero-emission service between Bayonne and Biarritz in 2019. Now over 40% of the journeys on the Chronoplus network will be made on electric vehicles.

The transit company uses articulated e-buses by Irizar on both lines. The ie tram model sits 38 people and has a 150 passenger capacity. Kéolis estimates the eBRT from Tarnos will carry 90,000 passengers per month.

Director Center of Excellence Energy Transition-Bus, Bruno Lapeyrie, told Sustainable Bus that compared to traditional tramways (20 – 30 million euros/km), the investment for an e-BRT could be much lower, with a capacity that is very close to the one of a tram.

For charging, Kéolis stresses that the vehicles can charge both fast at stops for about five minutes and slower overnight.

The second e-BRT line follows the same route as former bus line 2, connecting the centre of Bayonne to the centre of Tarnos in 20 minutes. It also connects to the first eBRT at five stops.

Kéolis has been busy electrifying its networks also outside of France. Just this May, the company has been awarded a ten-year contract worth €150 million to run electric buses in Gothenburg, Sweden. There has also been a major deployment of 246 e-buses by Keolis Nederland in the provinces of Gelderland and Overijssel in 2020.