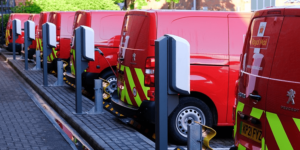 The postal service itself is leaving it more to a general announcement that electric vehicles with charging capacities of around 3.7 to 6.3 cubic metres will be procured to be used as part of the company’s usual delivery routes. The introduction of the vans will initially focus on low emission zones and so-called green cities. As part of the plans, Royal Mail will install charging stations in all delivery offices where the e-transporters will be stationed.

The postal service does not specify a van brand or a timetable. However, Commercial Fleets reports that procurement will start in October and that most of the vehicles will be Peugeot and Mercedes models. Specifically, the portal mentions the Peugeot e-Expert, Mercedes eVito and eSprinter. This fits in with the fact that Royal Mail has already used electric transporters from Peugeot and Mercedes for previous small-scale purchases. The desired loading capacities also match those of previously purchased vehicles from the two manufacturers.

In the view of Simon Thompson, CEO of Royal Mail, electric vehicles are not only the right step for the environment, employees and communities, “increasingly make more economic sense for the Company than diesel vehicles in the long-term”. Already, given its “feet on the street” approach to delivery, Royal Mail comes out as the clear leader with 85,000 postal delivery staff members in the UK with the lowest emissions per parcel. “Electrification of our vehicle fleet will strengthen our advantage. That’s good for our customers, our people & the planet. We look forward to working with vehicle manufacturers and government to increase supply so we can accelerate our transition to electric vehicles in the UK.”

In May, Royal Mail unveiled the first delivery depot in Bristol with an all-electric fleet of collection and delivery vehicles. This involved the Bristol East Central Delivery Office in the Easton area of the city replacing 23 diesel vehicles with electric ones and installing six charging points. Bristol was chosen because of its Clean Air Zone (CAZ), where certain vehicles have to pay a daily fee to enter the centre.