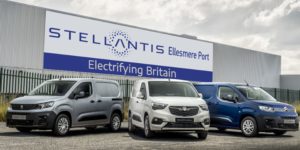 The Vauxhall plant in Ellesmere Port is to become an electric vehicle production site: Stellantis has announced that it will turn the plant into a production site for battery-electric commercial vehicles and passenger car models of the Vauxhall, Opel, Peugeot and Citroën brands.

Stellantis will invest £100 million (around 117 million euros) in Ellesmere Port so that the plant supports Stellantis’ “leading position in LCVs in Europe”, according to Vauxhall. Light commercial vehicles include the Opel Combo-e Cargo electric panel van and the Opel Movano-e large van. However, only the high-roof station wagons and their passenger car counterparts will be built in Ellesmere Port. These are the Combo-e Cargo for Opel and Vauxhall, the Peugeot e-Partner and the Citroën ë-Berlingo for commercial vehicles, and the Combo-e Life, e-Rifter and ë-Berlingo for passenger cars.

Production of the eight models is scheduled to start at the end of next year. They will be launched on the market earlier, as they are currently being built at the Spanish plant in Vigo. Models such as the Citroën C4 Picasso/Grand Picasso and the Peugeot 2008/e-2008 will continue to be built in Vigo. Another sister model to the panel vans is also built there as part of a cooperation: the Toyota Proace City, but Vauxhall has not given further details.

Prices for the passenger car models were recently announced, deliveries are scheduled to start in autumn. All vehicles are based on the 100 kW drive of numerous Stellantis models and use a 50 kWh battery. The models will be built in two lengths, one with about 4.40 metres as a five-seater and with about 4.75 metres as a seven-seater. The larger 75 kWh battery from the Vivaro-e van (and sister models) will not be offered in the high-roof station wagons.

With the investment, Stellantis intends to adapt the body shop, modernise final assembly and also set up on-site assembly for the battery packs. In addition, the plant is to produce CO2-neutrally by the middle of the decade. This is to be achieved, among other things, through a wind and solar farm that will make the plant completely self-sufficient in electricity – work is to begin “shortly”.

According to British media, the decision had become apparent in the past few days, but at the weekend there was still talk of investments of up to £400 million (468 million euros). “Performance is always the trigger for sustainability and this £100 million investment demonstrates our commitment to the UK and to Ellesmere Port,” Stellantis CEO Carlos Tavares said. “Producing battery electric vehicles here will support clean, safe and affordable mobility for the citizens. Since 1903 Vauxhall has manufactured vehicles in Britain and we will continue to do so.”

Tavares also thanked employees “for their patience and contribution”, the union for its “strong cooperation” and the UK government for “its continued support” – the government is backing the investment with an undisclosed sum. “Today’s decision will not only power Ellesmere Port into a clean future, but will secure thousands of jobs across the region in the supply chain. In this global race to secure electric vehicle production, we are proud to support Britain’s auto sector in this crucial transition as we work to build back better,” said Kwasi Kwarteng, UK Secretary of State for Business, Energy and Industrial Strategy.