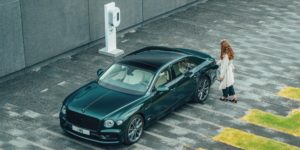 After the SUV Bentayga, Bentley has presented its second plug-in hybrid. The Flying Spur saloon has a total range of over 700 kilometres but manages a purely electric range of 40 kilometres.

Bentley has announced the electric range with reference to the preliminary WLTP data, but the official certification of the model is still pending. The Flying Spur Hybrid offers the lowest CO2 emissions of the range and allows better access to cities and ULEV (Ultra Low Emission Vehicle) zones, the British VW subsidiary says.

Brought out in 2019, the 5.32-metre-long Flying Spur generation is based on the Volkswagen Group’s MSB platform, making it related to the Porsche Panamera. The Flying Spur Hybrid uses the 2.9-litre V6 petrol engine familiar from other Group models.

It is the performance data of the Flying Spur that differs from the values of other MSB models. Bentley specifies 400 kW as the system output – in a Porsche Panamera 4S e-Hybrid, for example, it is 412 kW and in the Bentley Bentayga Hybrid 330 kW. The increase in power is only due to the combustion engine: the electric motor produces the familiar 100 kW, while Bentley gives the V6 306 kW.

The battery is a 14.1 kWh battery which, according to Bentley, can be fully charged in two and a half hours – i.e. with a maximum of 7.2 kW AC. As with the other MSB models, there is no DC charging option. In terms of performance, the Flying Spur Hybrid is said to almost reach the values of the V8 combustion engine version: The sprint to 100 km/h is given by Bentley with 4.1 seconds, with the V8 it is 4.0 seconds. The top speed is 280 km/h.

Bentley does not give the exact fuel consumption and CO2 data because, as mentioned, homologation is not yet available. The Flying Spur Hybrid is supposed to start in EV mode as standard to increase the electric driving shares. In addition to EV mode, there is also a Hold setting to maintain battery charge and Hybrid mode.

It is not just being able to start in electric mode that Bentley is apparently trying to support with its plug-in hybrids: The vehicle will be “supplied with all the necessary market-specific cables” to enable charging at home, at industrial sockets or at public stations. In addition, customers can “choose a Bentley-branded wall box as a free option”.

Bentley is not yet naming prices, but interested parties should be able to order the vehicle from the summer. The first examples of the PHEV built in Crewe are to be delivered before the end of 2021.

As reported, Bentley wants to sell only battery-electric cars and plug-in hybrids from 2026 onwards; pure combustion vehicles will no longer be available. From 2030, only purely electric Bentleys will be offered.