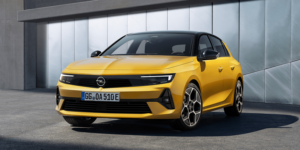 Opel has presented the sixth Astra generation, which will also be offered as a plug-in hybrid in two performance levels from the start. The new Opel Astra will be available to order from autumn and roll out to the first customers from early 2022.

Technical details on the two PHEV versions and pricing will be announced at a later date, according to Opel. Since the sixth-generation Astra, which has been redesigned from the ground up, is now also based on Stellantis’ EMP2, the performance data of the two PHEV variants are likely to be based on the familiar EMP2-based models.

Opel does, however, give one hint regarding performance specifications: across all engines, the Astra is expected to produce between 81 and 165 kW. This means that the top model is likely to be the familiar 165 kW PHEV, which combines a four-cylinder petrol engine with an 80 kW electric motor. This front-wheel-drive PHEV is also available with a system output of 133 kW, which means that the Astra’s PHEV drive is likely to be the same as that of the Peugeot 308, which was unveiled in March. The latter has a purely electric range of 60 kilometres according to WLTP.

For the time being, those who want to drive the all-wheel-drive version of the EMP2 will have to reach for the Opel/Vauxhall SUV Grandland – even though rumours persist that Opel might bring the all-wheel-drive PHEV with 220 kW in the Astra later as an OPC sports version. Opel had presented the revised Grandland (formerly called Grandland X) in June. Here, there is the hybrid with 165 kW and the Hybrid4 with 220 kW system power. The Grandland Hybrid can be ordered immediately in the UK starting at £34,365, representing a saving of over £6,000 compared with the comparable outgoing model.

With the Astra, the new generation is said to be distinguished not only by the PHEV powertrains. One point should also be the new “powerful” design: At the front, the Astra wears the ‘Vizor’, which Opel had first shown on the Mokka. A two-tone paint finish is optionally available – the black ‘Vizor’ at the front can be combined here with a black roof, for example.

The classic compact car proportions with a short rear overhang and relatively steep rear remain, however, even though Opel speaks of a “coupé-like” line. At 4.374 metres, the new Astra is just four millimetres longer than its predecessor, but the wheelbase has increased by 13 millimetres – which should provide more interior space. The luggage compartment is said to hold 422 litres.

The ‘Pure Panel
cockpit with its widescreens, which was also introduced in the Mokka, is also used in the interior – but according to Opel in a more advanced version. There will be no more analogue displays, the cockpit will be fully digital. While there is a lot of technology that was introduced in the Mokka, Opel says the Astra has also received components from the flagship Insignia – such as the LED Pixel light with 168 LED elements.

With a market launch in early 2022, however, the Astra will probably not be able to survive the full, seven-year product cycle without major adjustments. At the parent company Stellantis’ ‘EV Day’ last week, Lohscheller had announced that Opel would become an all-electric brand in Europe by 2028 – the Astra would then only enter its seventh year.

Vauxhall has confirmed pricing and specification for the all-new Astra in the UK. From launch, the Astra will be available in the Plug-in HYBRID-e variant with a power output of 180PS, with a more powerful 225PS PHEV variant to become available later next year. Prices for the Astra PHEV start from £32,200. The Astra will also be available as a fully electric model from 2023.