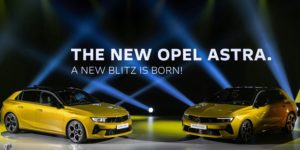 Opel will also offer the new Astra as a purely electric model from 2023. The manufacturer has now announced this at the official presentation of the sixth generation of the model. Before the launch as a BEV, plug-in hybrids in two performance levels are available for the new Astra.

The Opel Astra already had its online premiere in July – at the same time the two PHEV versions were also announced. Shortly before the IAA Mobility, Opel gave the sixth generation of its compact car its own presentation – since the entire Stellantis Group will be skipping the trade fair in Munich.

The new Astra will also be launched as a purely battery-electric car. This week, the Stellantis brand DS Automobiles had also announced that the DS 4 will be available in a BEV version from 2024. The DS 4 and the Astra not only share the EMP2 as their technical basis, but they are also both built at Opel’s Rüsselsheim plant. An electric version of the DS 4 would have made little sense when assembled on the same line without a corresponding electric vehicle version of the Astra.

Opel has not yet revealed any details about the drive system of the electric version of the Astra, something which DS has also kept silent about. The existing BEV models based on the EMP2 (Efficient Modular Platform) are the large vans or transporters, such as the Citroën ë-Spacetourer or the Opel models Zafira-e Life (passenger cars) or Vivaro-e (commercial vehicles). Here, the familiar 100 kW drive of the smaller eCMP is used; in contrast to the small car platform, the vans are also optionally available with a 75 kWh battery (instead of 50 kWh). Whether this will also be the drive of the Astra-e is not yet known.

The Astra premiere in Rüsselsheim, Germany was also the first appearance of new Opel boss Uwe Hochgeschurtz – the former Renault manager took over on 1 September from Michael Lohscheller, who is reportedly moving to VinFast. “The new Opel Astra is unique – with it Opel is driving into a new era,” said Hochgeschurtz. “This applies to the complete drive selection up to the battery-electric Astra-e just as much as to its top technologies and its grandiose design. It’s a car with which Opel is making its mark, and which has everything it takes to become a bestseller once again.”

According to Opel, the new Astra will be available to order from autumn and will be delivered from the beginning of 2022 – initially as a “sporty five-door model”. An “elegant estate version” with the familiar name Astra Sports Tourer is to follow “shortly”. Whether this body version will be offered for the Astra-e from 2023 onwards is not yet clear.

All new Genesis models to go fully electric by 2025