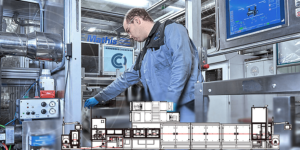 Customcells announces the completion of a financing round in which the battery specialist brings three new shareholders on board. Among them Porsche. The move comes just a short time after the joint founding of a battery joint venture with Porsche and can be seen as a push towards large-scale production.

All shareholders have agreed not to disclose the amount of the capital contributions and shareholdings. According to the  German publication Handelsblatt, the amount is in the range of 20 to 30 million euros. Officially, Porsche Ventures, Vsquared Ventures and 468 Capital will take over the shares of the technology consultancy P3 Group, which had entered Customcells Itzehoe GmbH in 2017 – and has now decided to exit. According to an accompanying statement, Customcells founders Leopold König and Torge Thönnessen will remain majority shareholders in the company, which operates sites in Itzehoe and Tübingen.

Customcells is a manufacturer of small and medium-sized battery cell series and states that it intends to invest the money from the financing round in the expansion of the Itzehoe and Tübingen sites as well as in the further development of its own technologies and research projects. “With Vsquared Ventures and 468 Capital, as well as Porsche Ventures, we will have strong partners at our side in the future who will help us to drive the development of CUSTOMCELLS even more decisively – on both the national and international stage,” expresses Leopold König, CEO and co-founder of Customcells. “Together, we now have the opportunity to actively shape Germany’s future viability and its role in battery cell development and production.”

At Customcells, things are currently moving at a rapid pace: just a month ago, the company completed the establishment of a joint venture with Porsche for the production of high-performance battery cells for motorsport. Cellforce Group GmbH will be based in Tübingen and will be 83.75 per cent owned by Porsche. The managing directors are Markus Gräf as Chief Operating Officer and Wolfgang Hüsken as Chief Financial Officer on the Porsche side and Torge Thönnessen as Chief Technology Officer on the Customcell side.

By 2025, the workforce is expected to grow from an initial 13 jointly recruited employees to up to 80 people. The main objective of the joint venture is to operate a production plant with a capacity of at least 100 MWh per year, which, according to the partners, corresponds to high-performance battery cells for 1,000 vehicles. According to media reports, operations are to start in 2024. It is still open whether the cells will be used only in motorsports or also in limited-edition road-going sports cars.

In the course of the completed financing round, Customcells emphasises its self-image as a manufacturer of cells that are tailored to the respective requirement profile of customers. “Applications in niche markets are particularly dependent on fast development and adaptation cycles,” the company says. In other words: Customcells feels comfortable in the prototyping and series production of lithium-ion battery cells in small to medium volumes.

Nevertheless, a statement by the new shareholder Vsquared Ventures indicates that the company is likely to move towards large-scale production: “We are proud to support this global leader in cell innovation as it scales and builds its business towards large-scale production of new classes of high-performance batteries in Europe,” Herbert Mangesius, co-founder of Vsquared Ventures, is quoted as saying in the Customcells release.

Dr. Ulrich Thiem of Porsche Ventures, the venture capital arm of Porsche AG, commented as follows: “With its expertise in battery cell development, CUSTOMCELLS offers a wide range of potential applications via its investment in Cellforce Group GmbH and the associated synergies, particularly in maritime and vertical electric mobility.” The Stuttgart-based company attests Customcells “a high corporate development potential (…) due to a largely entrepreneurial independence.”

With the third new shareholder in the alliance, 468 Capital, the ties to the USA are to be strengthened. Florian Leibert, General Partner at the venture capitalist, brings with him many years of experience and reliable contacts in the deep tech and start-up scene in the USA, it is said.

Among other things, the new shareholders will take over the shares of the technology consultancy P3. According to the Handelsblatt, these amounted to 33 per cent. “During this time, we have further developed our site in Tübingen together with P3 as part of the KomVar project and have grown from 20 to 100 employees,” Leopold König and Torge Thönnessen thanked the company for the trusting cooperation over the last four years. “In the process, we have been able to consistently follow our path from a Fraunhofer spin-off to an industrial company. P3 has supported us during this time with an important boost in the field of electromobility, which later gave rise to the idea of Cellforce Group GmbH and now, through the reflow of the P3 shares, has cleared the way for this. We respect P3’s decision to maintain neutrality and independence in the market, remain closely connected to P3 in business and look forward to further cooperation.”

“We see ourselves as project initiators,” P3 spokesperson Daniel Wulf told electrive. From now on, Customcells will no longer be a shareholder, but we will continue to support them in an advisory capacity. After the withdrawal from the joint venture preparations (originally a three-way participation of Porsche, Customcells and P3 was planned, as reported), the sale of the shares in Customcells, through which one was still indirectly involved in the Cellforce Group, is only logical. “We are focusing on what we do best: Independent consulting and initiating new projects with our customers,” said Wulf.