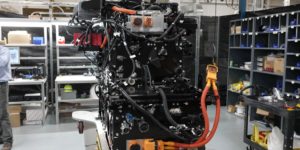 Toyota has announced that it will start assembling fuel cell modules on its own production line at its Kentucky plant in 2023. These will not be used in H2 passenger cars, but in heavy-duty commercial vehicles.

Specifically, a production line for integrated dual fuel cell modules is to be set up at Toyota Motor Manufacturing Kentucky (TMMK). The FC modules will not necessarily be used by Toyota or one of the truck brands belonging to the Toyota Group, but will also be sold to other truck manufacturers.

This fits in with Toyota’s previous US strategy: an H2 truck developed jointly with US truck specialist Kenworth was already unveiled in April 2019, and an improved version of the Kenworth T680 with Toyota fuel cells will be unveiled at the end of 2020.

The modules, to be assembled in Kentucky, Toyota plans to sell as a “key component of a FC kit”. Weighing 1,400 pounds (635 kilograms), the kit is said to offer up to 160 kW of continuous power. In addition to the fuel cell stack, the kit also includes a high-voltage battery, electric motors, a transmission and a hydrogen storage assembly.

“We’re bringing our proven electric technology to a whole new class of production vehicles,” said Tetsuo Ogawa, president and chief executive officer of Toyota Motor North America. “Heavy-duty truck manufacturers will be able to buy a fully integrated and validated fuel cell electric drive system, allowing them to offer their customers an emissions-free option in the Class 8 heavy-duty segment.” Toyota will also offer its expertise in powertrain integration, he said.

“This second-generation fuel cell system is necessary for a carbon neutral future,” said David Rosier, Toyota Kentucky’s powertrain manager. “It delivers over 300 miles of range at a full load weight of 80,000 lbs., all while demonstrating exceptional drivability, quiet operation and zero harmful emissions.” 80,000 lbs equates to a gross vehicle weight rating of over 36 tonnes.