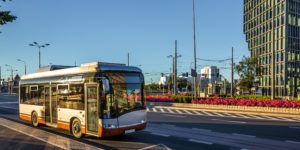 The Polish bus manufacturer Solaris has received two smaller orders for electric buses from Spain. A total of six battery-electric buses are to be delivered to Martorell and the Basque Country by the end of 2022.

pecifically, the Municipality of Martorell (Ayuntamiento de Martorell) has ordered two Urbino 8.9 LE electric. Martorell is located near Barcelona and is best known for the Seat plant there. In future, small electric cars will also be produced there.

According to the announcement, the nine-metre-long battery buses have batteries with a total capacity of 90 kWh and are designed for frequent and fast charging. The vehicles can be charged both by pantograph and conventionally by cable. For the latter, the Ayuntamiento de Martorell has also ordered two mobile chargers with a capacity of 40 kW each from Solaris. The power of the central motor of the buses is 160 kW.

A total of four electric buses will go to the transport company EuskoTren, which operates in the Basque Country. Two Urbino 8.9 LE electric were also ordered to operate on the line to Usansolo. However, EuskoTren has opted for a larger battery: Up to 260 kWh are installed here. The 160 kW central motor, however, is identical to the one in the Martorell buses.

In addition to the shorter buses, EuskoTren has also ordered two Urbino 12 electric. The twelve-metre solo buses will be used on the lines operated by BizkaiBus. They have an installed battery capacity of 440 kWh. and propulsion is provided by an E-axle with two integrated motors. The EuskoTren models are only charged by cable, but with up to 150 kW direct current. EuskoTren has ordered the corresponding chargers from Solaris.

All the vehicles that Solaris will deliver to Spain as part of the two orders are fully air-conditioned and equipped with a passenger information system with displays in the interior as well as a video surveillance system for the interior and exterior. EuskoTren has also ordered some driver assistance systems, such as the camera exterior mirrors called “MirrorEye”. In addition, EuskoTren uses the fleet management software “Solaris” developed by. Solaris’ fleet management software “eSConnect”.